The Reserve Bank of Australia has announced the outcome of its monthly board meeting.

The official cash rate has been left at a record-low 2.5 per cent, as forecast by most experts.

A finder.com.au survey of leading economists last week found all 16 respondents believed the official cash rate would remain steady today, with more than half predicting rates would stay low until next year.

Nine of the economists and experts predicted rates would not rise until 2015, while five respondents thought a hike might come later this year.

Ten of the respondents said the public’s reaction to the severe federal Budget cuts would prompt the Bank to delay a change in the cash rate.

Mortgage Choice spokesperson Jessica Darnbrough also said the decision to keep rates on hold was likely due to the significant drop in consumer confidence.

“In the months leading up to the federal Budget, many economists had predicted interest rates to rise in the not-too-distant future. However, this may no longer be the case. Instead, the Reserve Bank is likely to leave rates on hold for some time and wait and see what happens to consumer sentiment over the coming months,” she said. 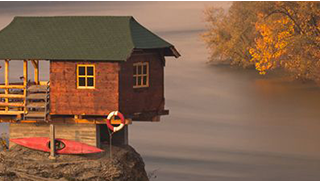 Shelter from the storm: Australians find sanctuary with big 4