Many of Australia’s regional cities have supply-demand ratios which are currently more favourable for property investors than the big profile capital cities.

A couple of years ago, from ongoing analysis of the construction industry’s intentions, Propertyology formed the view that there was a period of suppressed price growth ahead for most major cities. Consequently, we turned our focus to a few lesser known locations with better potential for investors.

A more controlled housing supply pipeline and very affordable property are partly why our buyer’s agents have been actively investing in several regional cities for a while now.

One of the biggest misconceptions about the recent property boom is that there’s a severe housing shortage. The evidence says that population growth over the last few years is consistent with historical trends while residential construction has been at record levels.

Over the past three calendar years, 676,067 new residential dwellings were approved compared to 461,383 for the three years ending 2008. Australia’s population growth over each of those three-year blocks was 1.063 million and 1.164 million, respectively.

In other words, Australia’s population growth was about 100,000 less however, we approved 200,000 more dwellings. 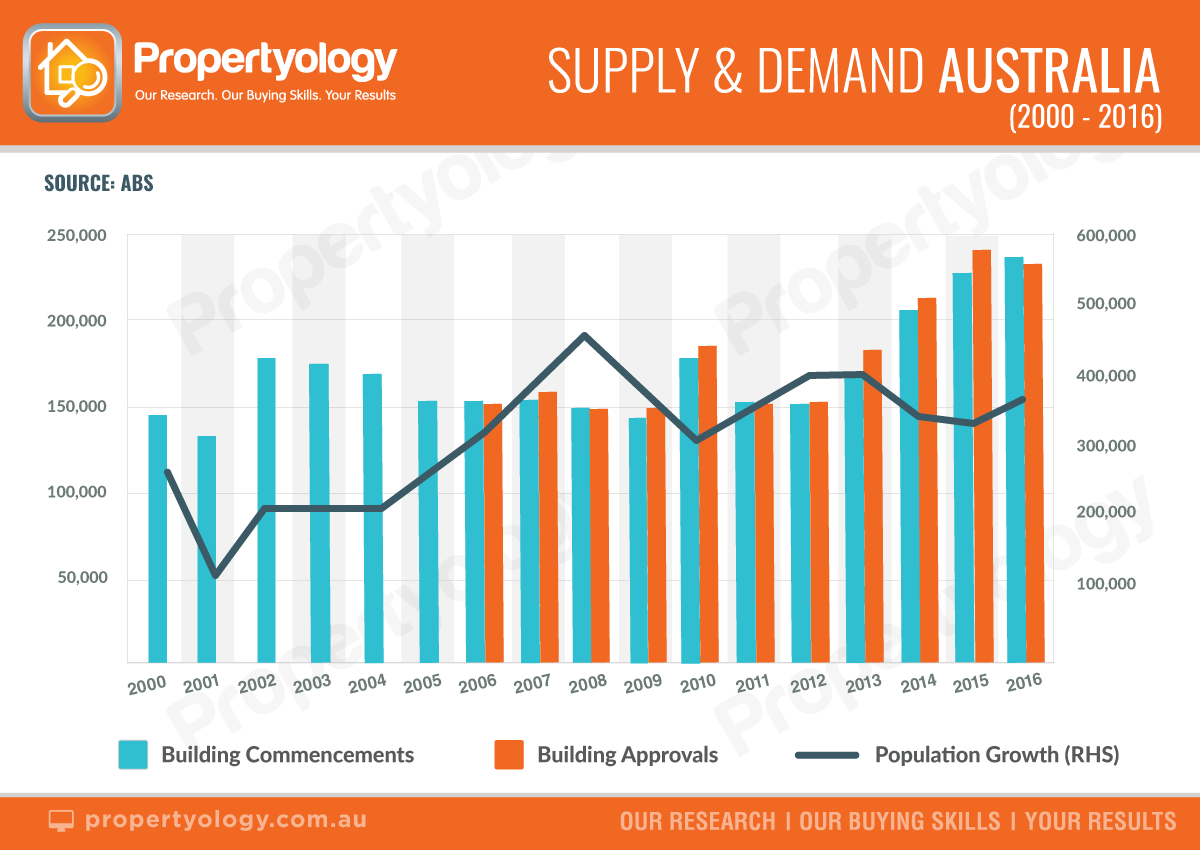 Strong house price growth in Sydney and Melbourne over the last four years was due to a number of factors, but a lack of supply was not one of them. While vested interest groups and some segments of the community will be quick to disagree with me, the evidence does not support their statements.

For instance, comparing new supply and population growth of 2016 to 2008 when Sydney’s median house price only increased by 0.6 per cent, population growth was the same but more than twice as many new dwellings were supplied in 2016. 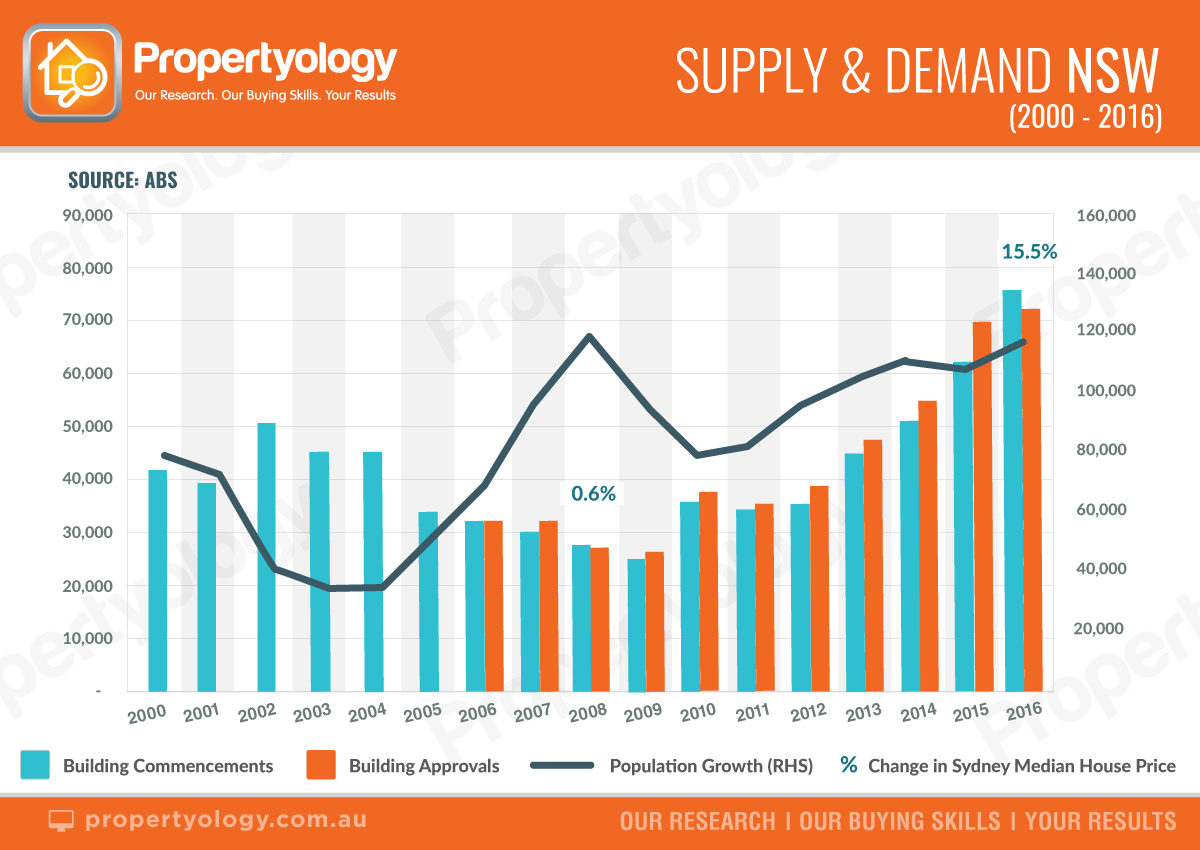 Sydney and Melbourne’s stronger economy - and consumer sentiment which comes with it – at a time of record low interest rates – has created increased buyer activity to levels over and above the underlying demand of population growth. The record high volumes of housing supply will flow through to much lower rates of price growth as confidence wanes from housing affordability concerns and tighter credit policy.

We only need to look at cities like Brisbane, Adelaide and PerthPerth, TAS Perth, WA to see what can happen when consumer sentiment isn’t as strong while supply levels are high.

If there was a such a dire shortage of housing, rents would be increasing significantly every time a lease expired however, the evidence suggests nominal movement in rents for five years. 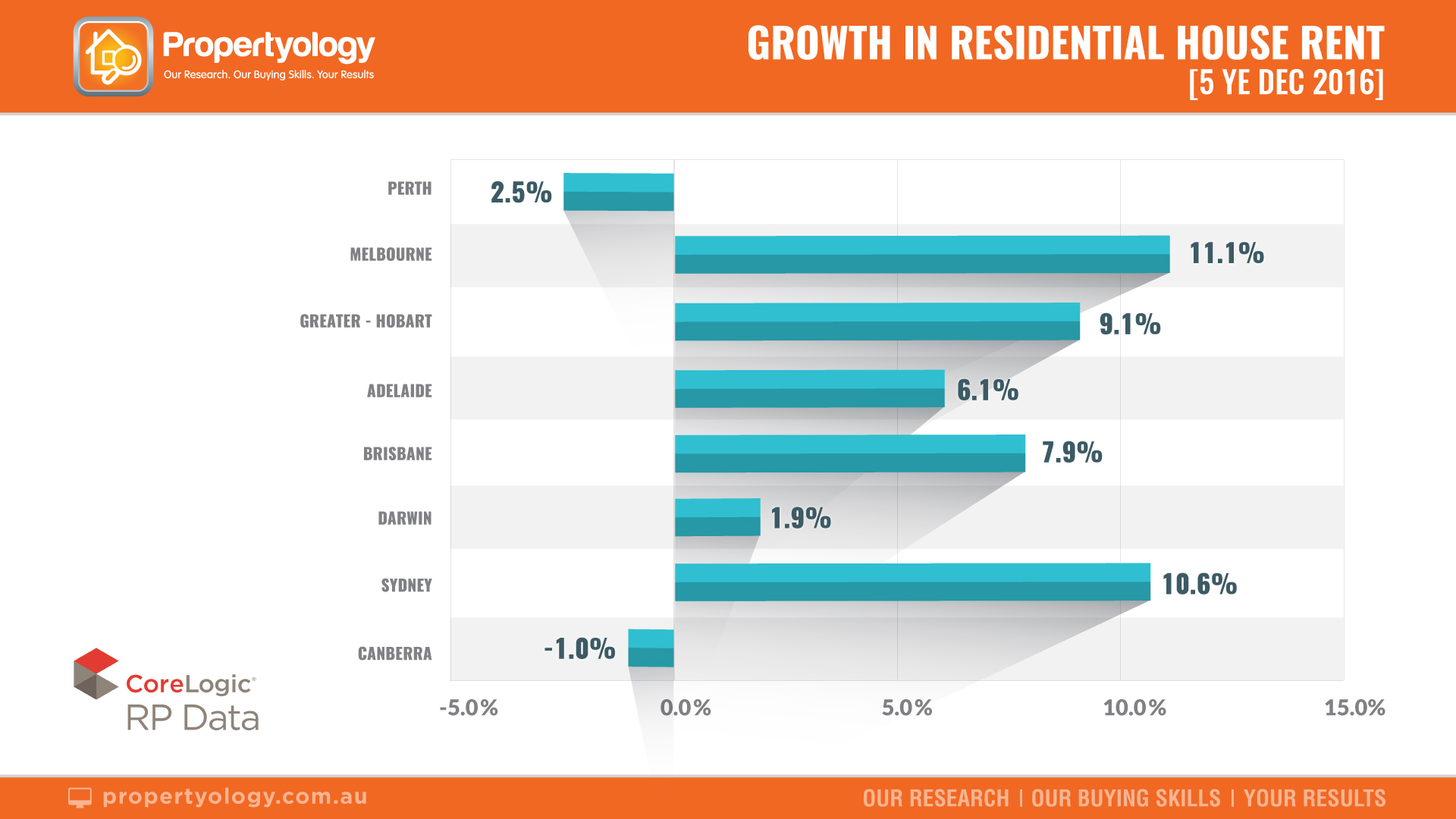 Since 2013, there has been a distinct trend in Australia's bigger cities for apartment construction. Ten years ago, 3 out of 10 properties approved in Australia were apartments, whereas today it is 1 out of 2.

During the 2016 calendar year, 80 per cent of new dwellings approved in Canberra were apartments – it was 70 per cent in Sydney, 58 per cent in Brisbane, and 54 per cent in Melbourne.

It was only 13 per cent in Hobart where housing supply volumes maintained its status quo over the past few years while factors on the demand side of the equation have improved.

Out of all of the capital cities, the official data suggests that Hobart will have the tightest level of supply over the next few years. For capital growth and rental yield, Hobart was Australia’s best performed capital city for the year ending June 2017 and Propertyology’s research suggests it’s likely to hold this mantle for a while yet. 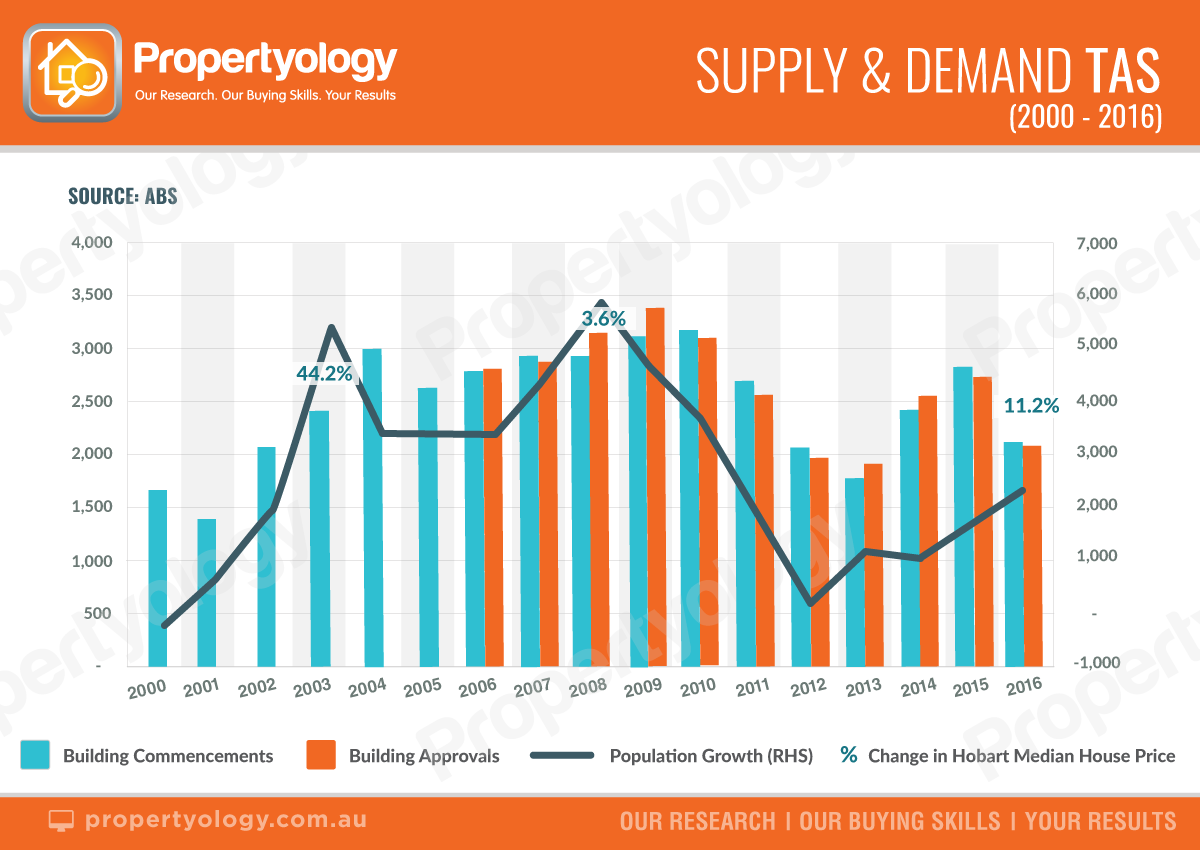 There are several regional cities across the country where the housing supply pipeline is significantly tighter than most capital cities. With very affordable entry prices and strong yields, the annual holding costs are negligible. Taking advantage of such opportunities has meant that some of our investors have been able to comfortably afford to buy 2, 3 or even 4 investment properties.

‘Big city’ is far from a magic formula for ‘best investment’. To the contrary, 78 per cent of Australia’s record building approval volumes in the last three years were concentrated in our capital cities – home to 65 per cent of our population. 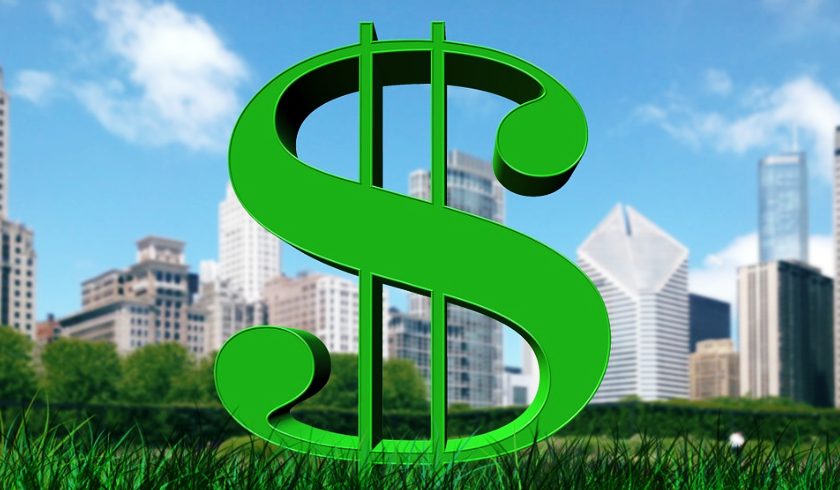