The next city to boom and it could be bigger than Sydney!

Sydney’s property market has already cooled and Melbourne’s is expected to be not too far behind however, a leading property market analyst forecasts that a bigger property boom is about to unfold elsewhere. According to national property market research firm Propertyology, Hobart has the potential for price growth to push past 20 per centduring the 2018 calendar year - well above the best years produced by both Sydney and Melbourne during their boom and the highest annual price of any capital city for 10 years.

“Hobart’s growth cycle today is comparable to where Sydney was in 2014. All of the metrics which we analyse suggest that, all things being equal,the 15 per cent price growth from 2017 will be surpassed in 2018 and that there’s currently no end in sight,” said Propertyology Head of Market Research, Simon Pressley.

Sydney and Melbourne have concluded their fifth strong year whereas Hobart’s growth cycle didn’t commence until 2016. Both Domain and Core Logic confirmed that Hobart was Australia’s best performer in 2017. 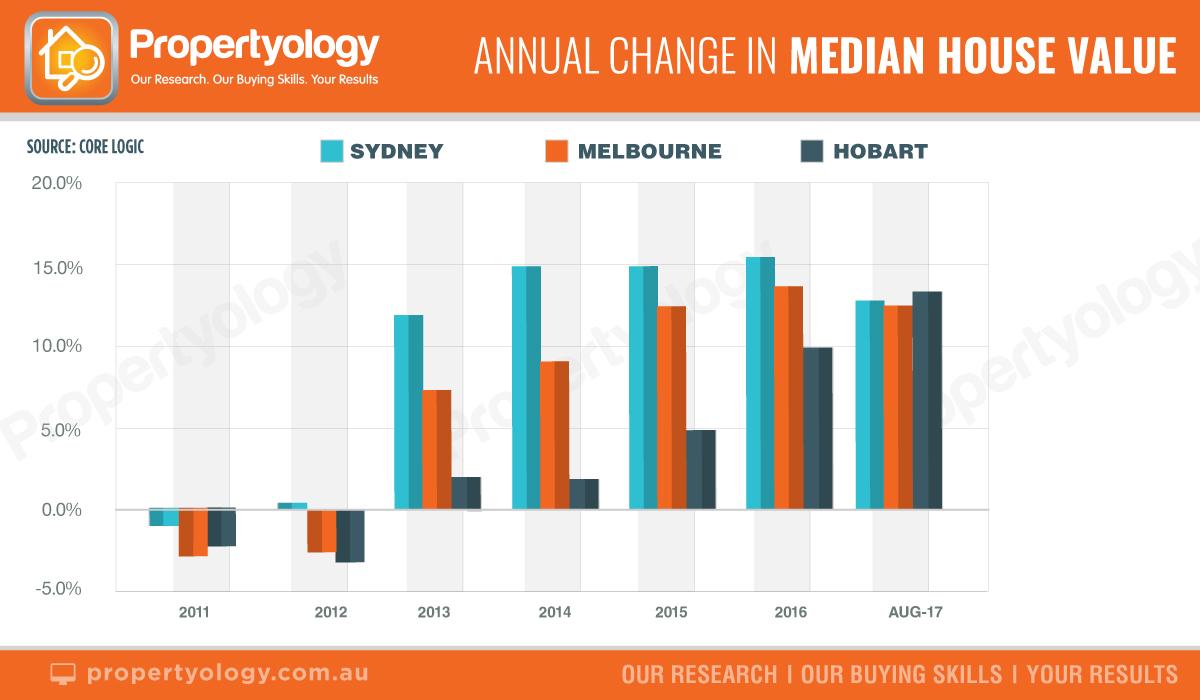 “Hobart has an enormous head of steam. The number of properties listed for sale now is less than half what was available a few years ago. Our buyer’s agents have missed out on numerous properties to people who have been prepared to pay up to 10 per cent more than us. It’s like a flock of seagulls fighting over a chip,” Pressley said.

Of the seven city councils which make up Greater-Hobart, Clarence, Glenorchy, Hobart City, and Kingborough are the best markets.

Affordability and the significant improvement in Tasmania’s economy are driving housing demand while supply is incredibly tight.

“Most Australians don’t realise that Hobart’s increase in job volumes over the last 12 months is 4 times the national average and more than double that of the next best capital city. Tasmania is building an international reputation for world-class agriculture, unique tourism experiences, and advanced manufacturing. Hobart is also a university city. The economy is firing up,” Pressley said.

After correctly anticipating the resurgence of Tasmania’s economy, Propertyology commenced actively investing in Hobart property in 2014. “The transformation has already been remarkable and we feel that few people appreciate that even more exciting times are ahead. The pipeline of infrastructure and major job-creating projects is diverse and extensive,”Pressley says.

Big international brands like Hyatt, Marriott, Fragrance Group and others are expected to commence work on several new luxury hotels over the next year or two. There are plans to extend the Hobart airport runway to accommodate direct flights from Asia, which has already produced record volumes of visitors from business delegates and tourists to Tasmania.

The state’s biggest tourist attraction, Museum of Old and New Art (MONA), has plans for jaw-dropping expansions that include a luxury hotel wing that hangs over the Derwent River and a high-roller casino.

Submissions have been sought for a multi-billion dollar proposal to redevelopment waterfront land in Hobart’s heart, Macquarie Point, in to an iconic cultural precinct that will draw people from all over the world for a truly unique experience.

Other major job ceating projects include a $700 million upgrade of the state’s biggest hospital, a new university, and a $400 million technology hub in the CBD with facilities for up to 3,000 students.

Greater-Hobart’s population growth rate of 0.9 per cent in 2016 was higher than New South Wales’ Central Coast and Adelaide.

“Housing demand in Australia’s most affordable capital city is largely driven by local confidence from the rapid job improvement. Now that the capital growth is there for all to see, mainland investors are appreciating that Australia’s highest rental yields mean that the cost to hold a property in Hobart is effectively nothing,” Pressley said.

Hobart’s vacancy rate of 0.4 per cent is the lowest on record for any capital city. Mr Pressley believes that rental pressure will intensifying even further. Whereas big cities like Sydney, Melbourne and Brisbane are now seeing record volumes of new supply hitting the market, Propertyology refers to the low building approval volumes in Hobart.

With a median house price that is approximately one third of Sydney’s, Hobart is a considerably less risky bricks-and-mortar proposition.

“Hobart is the only location in Australia which has the combination of an affordable entry price, an economy which is already strong (and still improving), hardly any impact on investor’s annual cash flow, and a tight supply pipeline for as far as the eye can see,” Pressley said.

“The 15 per cent headline capital growth rate over the last 12 months is dragged down by the lower rates of growth in Hobart’s urban fringe. With rates of supply tighter than anything we’ve seen, it’s quite conceivable that property prices in metropolitan Hobart could exceed 20 per cent next year and beyond,” Pressley said. 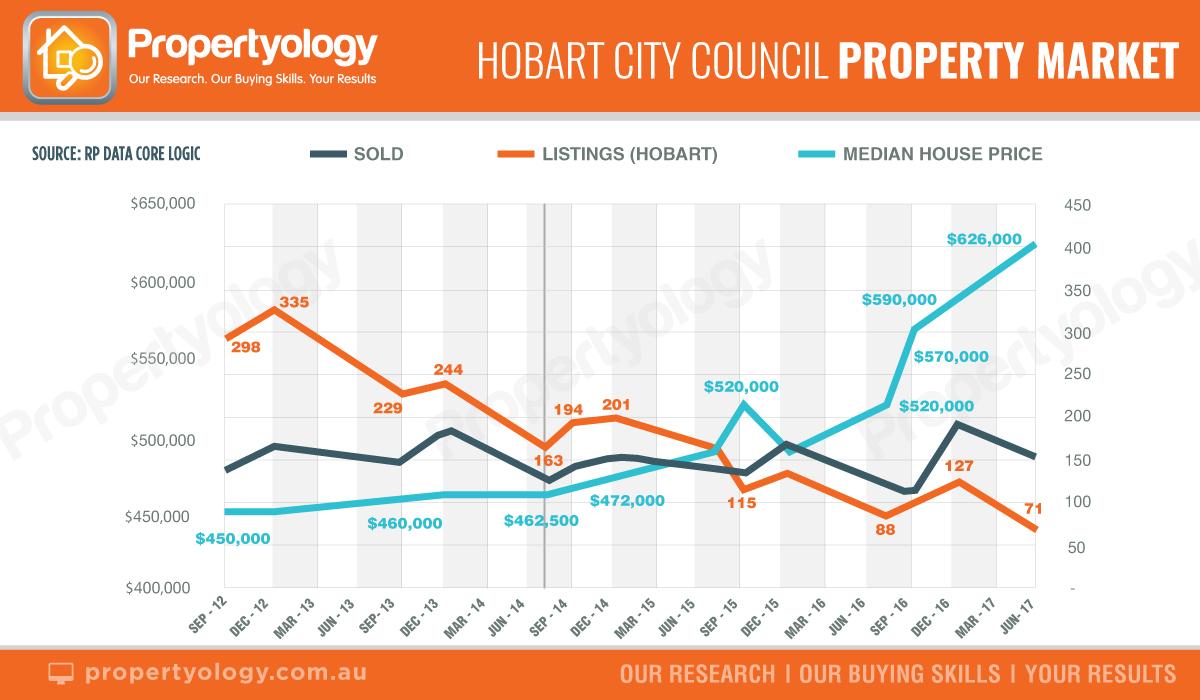 The next city to boom and it could be bigger than Sydney! 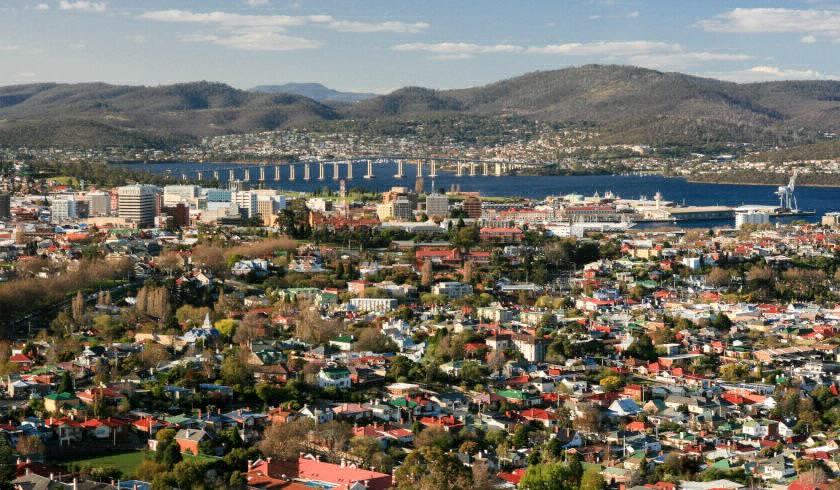