Ten years ago, the biggest financial crisis in decades rocked the global economy. At its roots, the GFC begun with American borrowers getting loans they couldn’t afford & having their repayments increase with‘adjustable rate mortgages’.

Fast forward ten years, we are replaying the start of their story. Thousands of Aussie borrowers are facing a repayment increase on their mortgages in the next 18-24 months. Most have no idea. Many won’t be able to afford it.

Australia, we have a debt problem.

This article puts a spotlight on the origins of our debt problem and explains how we got here. For background, in this earlier article, we explained how Australian interest only loan contracts work and how these loans will have a repayment increases in coming years.

How did Australia get into a debt problem?

The origins of our debt problem begin with interest rate reductions following the end of the mining boom.  Naturally, the cash rate reduction incentivised Australian’s to take on more debt.

However, lenders ignored this key pillar of lending regulation. They only applied this buffer to new debt, not to debt that customers held with other banks.  This loophole effectively allowed some borrowers to avoid ‘stress testing’ when obtaining a loan.

With rates at record lows, and no one adequately supervising the banks, Australia’s household debt continued to grow between 2012-2015. 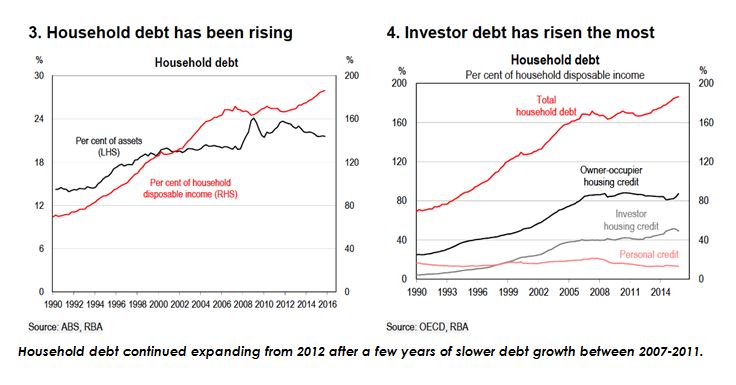 House prices begun rising & interest only loans had become increasingly popular.  These are loans that borrowers don’t have to pay down for the first 5 years of their loan term. Thereafter, these loans have their repayments increase as they move back to principle and interest terms.  On a $500,000 loan size, the repayment increase after 5 years is roughly $900 per month. 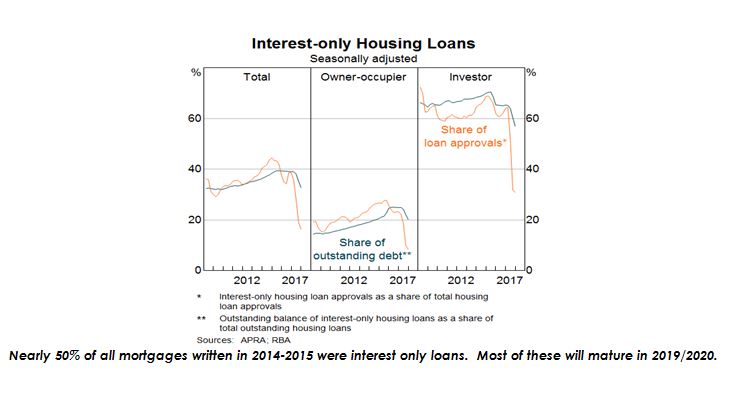 Eventually, regulators started to get concerned about the rapid growth in residential mortgages&looked at how lenders were applying their lending assessments.

What followed was a massive reduction in borrowing capacities and restrictions on interest only loans as lenders applied more robust buffers in their affordability calculations.  Borrowers would also be required to meet the new lending rules to have their interest only terms extended.

The glut of interest only lending that was approved under poor lending practices has a potential cost.  Borrowers that got those loans will be facing higher repayments when their IO periods expire.  Many will not pass the new higher lending standards.  Furthermore, over 25% of households have less than 1 months savings available to them to absorb repayment increases. 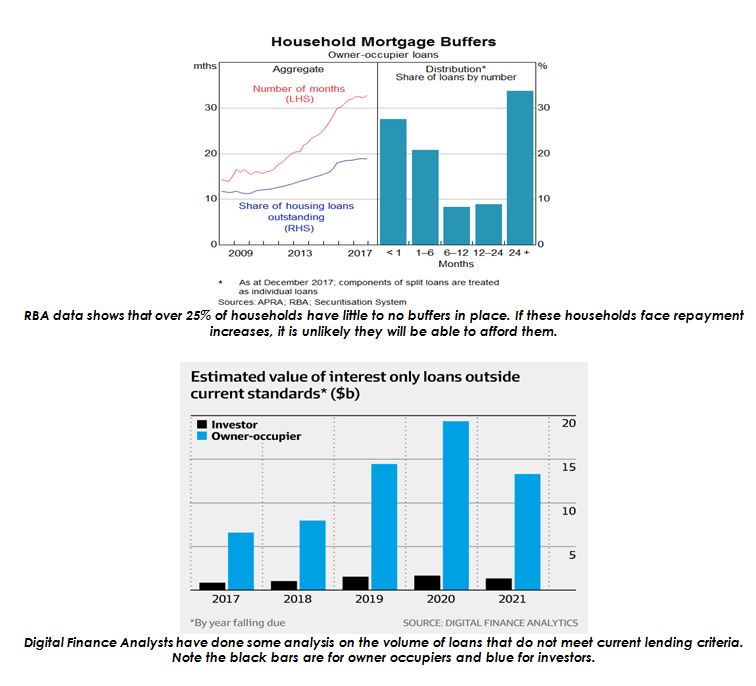 What options do borrowers have?

Borrowers on interest only loans that mature will fall into one of the following four categories, from best to worst;

What should the regulators do about it?

Firstly, the regulators need to understand the size of the problem.This month the RBA and the IMF both dressed over Australia’s debt, looking at current financial stress indicators to play down any issues.  Financial stability experts know this analysis is weak, as measures of financial stress lagwell behind origination problems.  Furthermore, many borrowers are completely unaware of their repayments rising (hence aren’t stressing about them!).

What the RBA, APRA & ASIC need to be doing is working out:

Only then can the size of the problem be properly quantified.

If this analysis reveals a big enough problem, regulators will need to devise a way to soften the landing.  Here is a draft five-point plan to manage the market impacts:

How likely is a ‘soft landing’?

Australian regulators have been facing a delicate balancing act managing the economy post mining boom. At this point in the economic cycle, the regulators job is to orchestrate a soft landing.

While the start of our story is like America in 07, the way this story unfolds will likely be far less dramatic.

High household debt is a threat to the economy and requires robust monitoring and management. To date, regulators have failed to appropriately acknowledge the size of the current debt problem.

Nonetheless, they have the tools in their locker & a proven track-record of success to suggest that Australia’s debt problem will end with a soft landing.

Redom Syed is the Founder of Confidence Finance. Redom has been recognized by MPA magazine the Youngest Top 100 Broker’s in Australia after settling over $150 million in lending. Prior to becoming a finance broker, Redom worked as a Macro-Economist at Federal Treasury.  Here he became a published author on the design of the International Financial System and spent 3 years working on financial market regulation. 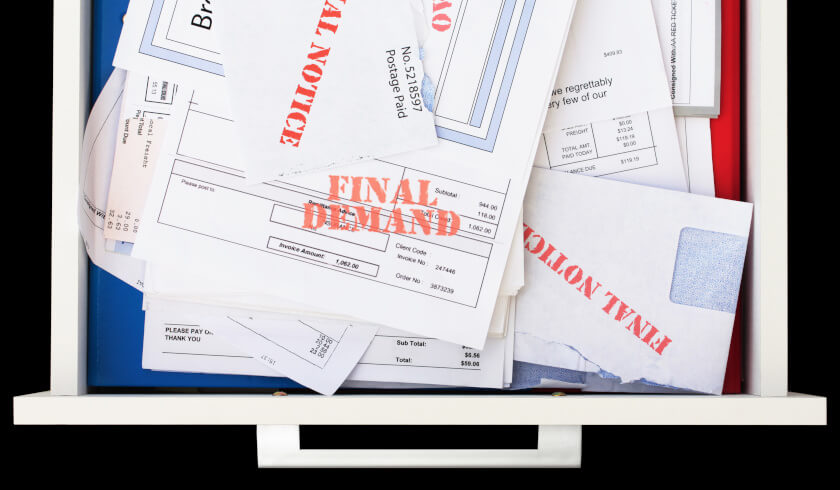