Property buyers looking to generate a profit through renovating are being cautioned about undertaking smaller projects and misunderstanding the numbers. 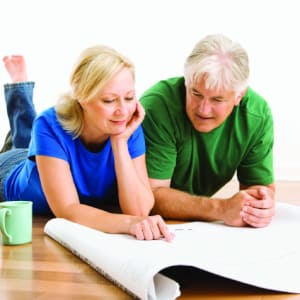 Mr Sirianni said in the current market, people mistakenly believed that minor renovations – such as putting in a new kitchen, a nicer bathroom and floorboards, delivered a massive improvement in value.

“Minor renovations are more likely to have an impact with a unit,” he said. “But with a house, superficial renovations may make a property more saleable, not necessarily produce a greater value – particularly given that in Australia, a large proportion of a property’s value is in the land.”

Mr Sirianni said property buyers who purchased a run-down property with a view to renovating it were “doing the equivalent of putting on make-up”.

“In most cases, superficial renovations may result in a slightly higher purchase price, which might attract more buyers, but generally, you’ll attract people who are still looking.

“It’s not the new floorboards, a new kitchen or a renovated bathroom that will have the banks’ valuers applying additional value to a property.”

Mr Sirianni said with houses, structural improvements – such as additional bathroom and bedrooms, or a new garage – were far more likely to have a real impact on a property’s valuation.

“Changing the footprint of a home is where you can ‘turbo-charge’ the value of a property,” he said. “For example, taking a three-bedroom, one-bathroom house and adding an extra bedroom and bathroom will make the home more appealing to a wider group of buyers and significantly increase its value.

“Other improvements such as a garage or a pergola, which allows for outdoor living and entertaining, also add real value.”

Mr Sirianni said if investors are planning to undertake renovations that were not structural, the bank would generally complete “a cash out”, which is the process of lending the borrower money without doing a new valuation on the property.

“People who improve the look of a home with non-structural renovations generally don’t understand that’s all they have done – that is, take away the run-down look of the property,” he said. “They haven’t added bedrooms, bathrooms, a garage or anything that will put it into a new category for buyers.

“The banks’ valuers will look at it in exactly the same way. It’s acknowledged that you spent, say, $50,000 on it, but they know that you’re very unlikely to get more than your $50,000 return on it.

“Quite often, the banks won’t even match the valuation to what you’ve spent, unless there’s a big structural improvement.”

“Generally, with non-structural renovations, banks produce a computer-generated valuation to confirm a property’s existence,” he said. “However, when there are plans to structurally renovate a property with the addition of a new room or knocking a wall out, for example, the bank will want to do a valuation because the potential exists to damage the bank’s security.

“In this case, the lender will request copies of the council-approved plans as well as a fixed price builder’s contract to confirm the renovations will be conducted by a licensed builder.”

Mr Sirianni said people should remember the old real estate adage that you make your money when you buy, not sell.

“Speaking very generally, the key to getting a capital gain is to carefully select a property and negotiate with the vendor to get it for the best possible price – the capital gain will be in the purchase price, in addition to a structural renovation.”