Thousands of new residential properties will be released in the Northern Territory by 2017 under a government plan to ease housing pressure. According to minister for housing Matt Conlan, the initiative will hit the halfway mark by mid-2015.

“With several developments in the pipeline following negotiations with the private sector, we are also on track to be well ahead of our second-year target of 400 additional homes with a projected target of new dwellings to come onto the market during the next 12 months in excess of 750,” Mr Conlan said.

The program aims to address affordability in the NT caused by a shortage of housing, according to Mr Conlan.

“These projects, along with our record land release program will significantly increase the overall supply of housing in the Territory and restore balance to the market,” he said.

According to RP Data, the Darwin median price is currently $580,000, making it the second most expensive city in the country.

Recently, the general manager of Raine & Horne Darwin Glenn Grantham warned the surge of apartments in Darwin was creating a buyer’s market.

"It's significant when you consider that in any single month, we probably only sell between 250 and 300 properties in the Darwin CBD, the Darwin suburbs and Palmerston combined,” he said.

Affordable housing refers to a residential property that a household can afford to pay for aside from their necessities. 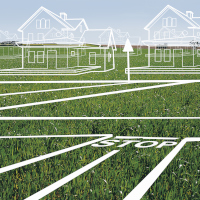 Last Updated: 22 December 2017 Published: 28 August 2014
share the article
The real costs of being a landlord
Investors ask: Getting offers accepted