To place this video into your website, use the embed code above.

In part two of this special edition of Inside Word, Smart Property Investment talks to Harry Dent, controversial commentator and author of The Demographic Cliff about why he believes Australian property investors should stop expecting capital growth.

Some contractors have said that the Australian market does have unique circumstances. We've got negative gearing for example to encourage investment, the supply of land in capital cities is fairly limited by geographical factors, as you've said yourself strong immigration, and those factors maybe undermine some of the arguments you've made. What would you say to those people? What's your argument against that?

The biggest factor to me for Australia is your immigration. Now here's the problem, if we see a global bubble - I can tell you from studying-- In the United States, let me tell you, we had the biggest immigration of anybody in the late 1800s to late 1900s. You know that immigration dropped to zero in the Great Depression? To zero. It didn't just go down 20, it ended. The people don't want immigrants when there're no jobs, and the immigrants don't want to take the risk and expense of immigrating when it's not a good economy.  So what I've learned is in a downturn, immigration drops. If you're depending on immigration and foreign buyers that can just disappear overnight and that's the problem. That's what will hit you. That's why I say it's a wild card, China is what's different. I don't think Indonesians are going to keep coming and other people, but rich Chinese - if that bubble keeps un-raveling they may say "We need to get out of here. We're rich and our government is going to come after our wealth and they're going to restrict us more". That's why I say that's a wild card. Any other country I'd say "Oh, strong immigration? Don't expect it to last." It won't last forever in a downturn but it may last a little longer here.

So Australia's a little bit harder to predict just because of that strong Chinese influence?

Now the other thing I would say though, and I was debating Mark Bouris on this last time I was here at the Secure the Future conference. He was saying "Yeah, I understand where stocks would go down, demographics-". Real estate is very expensive and it may not go much higher but he just doesn't see how it could possibly go down. So that's where I look at history and say "No, sorry". Bubbles don't correct. I've never seen anything bubble up and just go sideways. If I'd seen it I'd say that's possible. So if Australia is going to have that happen, it'd be the first time in history.

So I guess my main point is because of how expensive- I don't see much upside in real estate from here, even from somebody like Mark Bouris-- and if I'm right, there could be a very substantial downside especially if you're leveraging with mortgage and debt to buy real estate. So I just say "Gosh just back off here, see if somebody like me is right for the next year. If we don't see some major things go wrong in the world in the next year- I've got cycles that point down so strongly in 2014 more than any year in this decade - If we don't see something crack this year then I'm going to have to question some of my cycles and analysis. Or just say "Government's are just off setting any down turns". I think the governments have stretched this bubble for 5 years, and they've stretched it where it's going to burst and Japan has proven this. Japan has never had a rally that's lasted more than 4 and a half, 5 years. And in fact even in the United States, even including the boom, we only saw one boom in my lifetime - since the early 50s - that lasted more than five years without a 20%, 40%, 50% correction so I think this is the year things go and we get towards the end of this year and nothing really happens in the world. China doesn't blow or Europe doesn't go into a crisis, the United States real estate doesn't back off - and I think, I am predicting that it is going to back off, it's mostly speculation, it's not real buyers - then I'd say "You know, maybe governments can keep this going a little while", and if governments keep it going then yes, it's not going to burst

What's the worst case scenario for Australia if all...?

Especially if you're leveraged and mortgaged. That means you're going to be under water even if you put 20% down.

So do you think that investors in property in Australia need to re-think the way the approach property? I think it's common wisdom in Australia that property's a fairly safe investment. It's bricks and mortar, you can see it, you can visit it and it's probably going to increase in value.

What's unique about real estate, and why people do need to think different, is that real estate lasts forever. Bricks and mortar like you say. That's actually a liability in a way because when a larger generation is dying- And what are dyers? They're sellers. They either pass it to their kids, which means they don't have to buy a house like so, or they sell it. Put it on the market and certainly dead people don't buy houses after they die so when I have a new indicator that says I don't just look at the peak buyers at 41 in the U.S or 42 in Australia. I subtract the people that are going to die at age 82 I think it is in Australia, 79 in U.S, 84 in Japan. When you do that the net demand for houses- The reason I did this was because Japan should've bounced in the late 90s with a little in the next - It didn't bounce. I thought and thought, it took me a couple of years to say "Oh, the old people are off setting these younger people's demand by selling pressure. That's why it's not going down any more. These indicators say even in Australia, net demand is going to slow. It's not going to go negative like Japan has and the U.S will about 10 or 15 years from now but it's going to slow. That means slowing price pressure so on that alone I think over time real estate's not going to appreciate like it did. To me it's like going back to Monopoly. Why did you buy real estate when you were a kid in Monopoly? You didn't buy it because it's going to go up in value, you buy because when people land on it they're going to pay you rent.

So you buy it to live in, fix up, you buy- I mean to me I wouldn't buy a vacation home unless I'm going to be in it 6 months. Why would you buy a vacation home if you're going to use it 2, 3, 4 weeks a year. People buy because they think it's going to go up and you can't lose. That's the wrong way to think about real estate. I'm not going to buy something now unless- If I'm not living in it full time - unless I can rent it out for positive cash flow. If anybody can buy a condo in downtown Sydney or Melbourne and rent out for positive cash flow - I want to see it.

Thank you so much for that Harry. 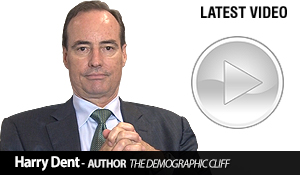