Property markets across New South Wales are performing well, though growth may ease over coming months Statistics from RP Data show Sydney house prices climbed by 14.8 per cent in the year to July, the greatest price increase of any city by a substantial margin.
Sydney also topped Australian Property Monitors’ quarterly analysis of price movements, with houses up by 3.1 per cent and units by 3.9 per cent.
The city boasts four out of the top 10 suburbs which were most in demand by potential buyers online, according to a survey by realestate.com.au. Interested buyers outnumbered available listings in Freshwater, Kirrawee, Cherrybrook and Balgowlah.

The prestige sector is also beginning to accelerate. While the $3 million plus range suffered in the wake of the GFC, the REINSW confirms confidence is returning and sales have doubled in the past 12 months.

Rents in the state also remain among the nation’s highest. Mosman was identified as the country’s second-most expensive rental suburb by RP Data, with a median rental rate of $1,500 per week. Woollahra, SeaforthSeaforth, NSW Seaforth, QLD, Roseville and St Ives were not far behind.

In regional areas, growth is expected to boom in certain pockets. Onethehouse.com.au recognised four of Sydney’s regional areas as the best investment picks over the next five years. Jerrabomberra, on the ACT border, was tipped to achieve 10 per cent growth per annum in the period and offers a yield around 5.15 per cent. Karabar, Banora Point and Medowie were also highlighted for their high returns and growth potential.

Nonetheless, the outlook for the state’s property market remains somewhat contested. National Australia Bank predicts New South Wales will weaken over the next two years, achieving growth of just 5.3 per cent in 2015 and 3.7 per cent in 2016.

Yet buyer’s agent Nick Viner from Buyers Domain disputes the idea that Sydney will begin to falter. While he acknowledges growth may ease from current levels, he believes Sydney’s unique geography, strong population growth and tight supply will continue to drive values higher in the future. 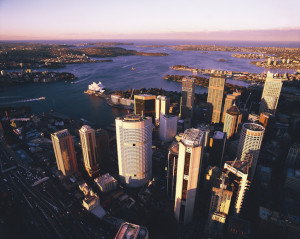