South west Sydney to take off

The proposed airport in Sydney’s Badgerys Creek will be a game changer for the city’s property and employment markets despite ongoing debate about the site’s suitability, according to a number of commentators. Speaking at BIS Shrapnel's Business Forecasting Conference last week, David Borger, director of the Western Sydney Business Chamber said that western Sydney was a “reasonably prosperous part of the world” but there were social and economic costs to how Sydney is currently structured.

“The problem is by 2036, the population of western Sydney is going to grow and it’s going to keep growing and actually the jobs deficit will be 321,000 … and eventually 500,000 by 2061. So I think that is the real fundamental challenge for Sydney – what sort of city do we want to live in? Do we want to lie in a city where half a million people are commuting every day or not?”

Mr Borger said there were two ways to resolve the issue: one was to “widen the pipes” which includes improving and expanding infrastructure such as the M5, M7 and railway links. This approach, he said, had limitations.

The other option, he said, is to provide more jobs in south west Sydney, of which the proposed Badgerys Creek airport and surrounding supplementary businesses would play a key role.

“For south western Sydney there is a lack of big ideas. We haven’t built a major airport in, it seems like forever, and it’s time for some big thinking,” he said.

“We want to avoid this notion that ‘there’s an airport, there will be noise, therefore no one can live there’. I just think that’s craziness.”

Mr Borger said the proposed flight path was mainly over the western Sydney employment area and very few residential properties would be affected by noise – which set Sydney apart from other cities which had grappled with where to house their second airport.

“Every city faces this problem … the only difference is we have one of the best sites in the world in terms of how few people will be impacted in terms of noise.”

Robert Mellor, managing director of BIS Shrapnel said the airport at Badgerys Creek had the potential to “shift the needle” in western Sydney and act as a “game changer” for employment in the region.

“That will mean more job opportunities and these areas become even more popular,” he said.

Mr Borger said Prime Minister Tony Abbott had made a commitment to having “shovels in the ground” by 2016. 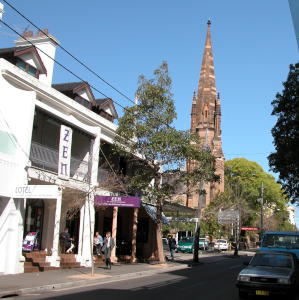