A new report based on hundreds of thousands of reviews has identified Australia’s best-loved suburbs. The analysis by Homely.com.au collates half a million consumer reviews to identify which suburbs received the highest ratings from Australians.

The results show that there is no set formula to determine popularity, with top-ranked suburbs found in cities and regional towns, in the inner ring or the outer suburbs, and in high and low price brackets.

Melrose ParkMelrose Park, NSW Melrose Park, SA, located on Sydney Harbour around 17 kilometres from the CBD, received a near perfect average score of 96.7 by users.

According to RP Data, this area has a median house price of $1,010,000, making it one of the more pricey entries on the list.

Bundall in Queensland came in second, receiving a score of 96.41 from users.

Located by the ocean on Brisbane’s Gold Coast, houses in this suburb sell for a median price of $767,000, RP Data reports.

Regional towns were also represented, with third place taken out by Newcastle’s The Hill neighbourhood.

Western Australia was the least popular state, with no suburbs coming in the top 25.

Its top ranked area, Dawesville, received an average rating of 92.07 and RP Data reports its median price is $435,000.

Homely.com.au CEO Jason Spencer said the reviews took into account a wide range of factors that buyers look for.

“Ratings and reviews take in multiple factors; when consumers create their review they respond to an indepth list of criteria, from how clean it is, the nightlife on offer, and how peaceful and quiet it,” he said.

Mr Spencer believes it is not just trendy or fashionable areas that attract interest.

“All too often people think the best homes are in the most expensive areas, but that’s not always the case with liveability,” he said. 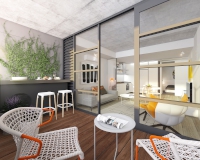 Last Updated: 22 December 2017 Published: 19 September 2014
share the article
City, country price divide deepens
The unexpected roadblock stopping you from getting your next property