New research has reminded Aussies to play it safe with property purchases and borrowing in the near future, following a warning that house price growth is slowing and heading for a 'million-dollar median’. >The Residex September Property Market Update from John Edwards, released yesterday, said a high level of unaffordability may suggest key markets within Australia are in a housing bubble. However, a dramatic change in the buying profile of homeowners means typical measures are not relevant any more.

Mr Edwards said current buyers are no longer median income families as they are largely renting. The driving force behind growth in values "seems to be existing homeowners who have reasonable levels of income and assets to support property purchases which are likely investments", he said.

“Buyers of house and land are now second and third-time housing buyers with income levels that are much higher than the median income wage. Median income families who are buying are now buying on the city fringes where housing prices are slightly more affordable,” Mr Edwards said.

“Currently it is important to recognise that house price growth is slowing. It is easy to overpay for a property at this point in time, and over payment will not be covered by increasing property values over the balance of this growth cycle. My word of warning to those who are tempted to stretch themselves by borrowing more than they can afford is don’t. Buy a lower-cost investment property and avoid the stress.

Mr Edwards said Melbourne will take much longer to reach the median price levels expected to hit Sydney, and he expects Melbournites will have to wait until 2024 to reach the "million-dollar median".

A survey of first home buyers, released yesterday, found at the current rate they typically save for more than five years prior to purchasing property. In 2011 that figure was less than two years, according to Mortgage Choice spokesperson Jessica Darnbrough.

“Of those buyers 88.2 per cent said it was the rising property prices that had stopped them from purchasing in their ideal area,” Ms Darnbrough said.

“They are determined to not out spend their means and will make sure they are in a position where they can comfortably afford their mortgage repayments before buying." 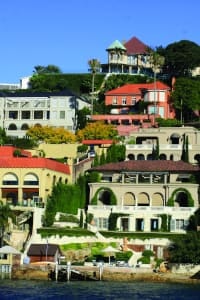