Queensland property is tipped to take off over the coming year

Over the past year, the Brisbane market has seen moderate growth compared to other east coast capitals. Over the 12 months to August, values are up by 5.4 per cent, according to RP Data.

However, activity across the city appears to be heating up. Figures from the REIQ show the average discount offered by vendors dropped to 5.6 per cent in June, compared to 8.9 per cent in mid-2013. Days on market also came down in the same period, falling from 90 to 59.

Investor and buyer activity may be picking up due to Brisbane’s comparative affordability. According to RP Data, 33 per cent of properties in the city cost below $400,000 – only Hobart and Adelaide offer more bargains.

At the other end of the price scale, Queensland has 13 suburbs with a median price over $1 million, RP Data reports. However, it was the only state where the number of million-dollar suburbs actually decreased in the past four years. Although Main Beach is the state’s most expensive suburb, with a median of $1,325,689, it is only the 179th most expensive suburb in the country.

Elsewhere in the state, activity is also on the rise. Queensland’s tourism sectors are going from strength to strength, according to Antonia Mercorella from REIQ. Their figures show Gold Coast prices have increased by 7.5 per cent over the 12 months to June while the SunshineSunshine, NSW Sunshine, VIC Coast is up by 6.2 per cent. Cairns has climbed by six per cent for the period and recorded the state’s strongest growth in the three months to June.

The state’s resources sectors are a mixed bag. Some towns previously underpinned by mining projects are now struggling. In the year to June, prices rose by just 2.5 per cent in Bundaberg, two per cent in Rockhampton and 2.8 per cent in Townsville, according to the REIQ.

Other towns are riding a new wave of resources growth. Prices in Toowoomba, which lies adjacent to the resources-rich Surat Basin, have risen by 8.1 per cent over the year. Meanwhile, Raine&Horne predicts Gympie will experience a boom over the coming year with the discovery of coal seams nearby. 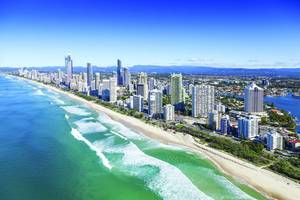