Canberra is continuing to record a subdued performance Canberra came near the bottom of the capital city pack in the year to August, with prices increasing by just 1.4 per cent, according to RP Data.

Property values in Canberra tend to be elevated considering its limited size and due in part to residents’ above-average incomes. Currently, Canberra has the lowest proportion of affordable properties of any city, with just 7.5 per cent of dwellings costing less than $400,000, according to RP Data.

The most affordable area within 10 kilometres of the CBD is Page, where the median price is $455,417, according to RP Data. In addition, Scullin, Giralang, Evatt and Kaleen offer cheap options in proximity to the city centre.

On the other hand, there are seven suburbs in Canberra where the median price for houses is over $1 million, RP Data reports. The city’s most expensive suburb is Forrest, where the median house price is $2,114,357.

A report by Herron Todd White advises investors to buy properties in central locations priced in the middle of the market. In particular, Hughes and Pages were highlighted as reasonably affordable areas offering larger blocks of land.

Herron Todd White also highlighted the potential of Narrabundah, calling it a “sleeper suburb”. This area is set to undergo extensive redevelopment along the foreshore and many older properties are being renovated.

But Herron Todd White also warns investors to avoid the unit market, particularly on the north side. Prices are softening due to increased development and more units are in the pipeline, the report states.

A similar warning was issued by Dixon Advisory, an investment advice firm. Their analysis suggests the Canberra apartment market is suffering from an oversupply. They also warn government job losses may cause buyers to back out of off-the-plan purchases, depressing values in this sector. 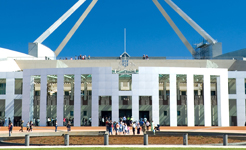