The next investment hotspots will be in certain coastal areas south of Sydney as people move away from the NSW capital and discretionary spending returns to the market, according to the owner of a large real estate group.

Speaking at a media briefing earlier this week, Charles Tarbey, owner and managing director of Century 21 Australasia said the coastal strip between Wollongong and Nowra is primed for capital growth – but investors need to be prepared to wait for the price increases.

“If I was an investor right now, I would start looking at discretionary spending areas as an investment,” he said. “And be prepared to wait a while. Some of those areas dropped by 50 per cent in price during the last downturn. If somebody was prepared to pay $1 million for something and now they’ll have to sell it for $500,000 – to me, that’s a good investment.”

Mr Tarbey said the region between Wollongong and Nowra is set to benefit from various roads and infrastructure projects. He said Wollongong in particular performed far more consistently than other coastal areas or resources-dependent towns.

In addition, he said the local council responsible for Nowra – Shoalhaven City Council – is becoming increasingly progressive and encouraging development.

“It’s progressive. Dan Murphy’s is going in there next week – now that’s big.”

Mr Tarbey said growth wouldn’t be instant, but if investors get in now they will benefit from the area’s promising prospects.

“I wouldn’t call it a hotspot because they’re already too late – but I’d say they’re your future investment areas if you were going to buy.” 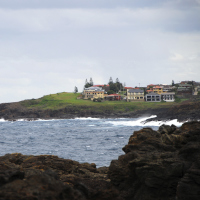 Where Hobart house prices are heading, according to ANZ

The best-performing markets in regional Australia

More Aussies ‘in tears’ during house-hunting