The Northern Territory’s solid growth is predicted to continue In the year to September, the Darwin market recorded capital growth of 7.1 per cent, according to RP Data. This indicates a fairly healthy market and puts Darwin above larger cities like Adelaide and Brisbane in terms of growth.

However, activity in the city has softened in the past year, with sales transactions down by 0.2 per cent compared to the 2013 financial year, RP Data reports. In the same period, most other capitals recorded a rise in transactions.

Herron Todd White predicts the market is in for a slowdown. A research report from the valuation firm suggests the market is evening out after two years of consistently strong growth. As a result, it forecast that prices may soften in the short term.

In particular, pressing affordability concerns have led to high levels of construction activity, Herron Todd White reports. Older style stock may suffer in comparison to new housing estates, and the report predicts prices may begin to fall in this sector.

Despite Darwin’s robust growth levels, values remain below their previous peaks. According to the Residential Development Council, prices are still over six per cent behind the previous high watermark.

SQM Research forecasts that activity in Darwin could continue at current levels into 2015. If the economy remains steady and interest rates are unchanged, the report predicts growth in the coming year is likely to sit between three and six per cent.

By comparison, the Alice Springs market remains mostly quiet, recording a low level of transactions in the past year, according to Herron Todd White. The firm notes that activity has spiked since the government announced it would curtail the first home owners grant in December but this effect is expected to be temporary.

Geographically, Larrakeyah is a great location to get into for investors. The suburb is right next to the central business district, and there are lots of places of interest there for residents. The area is a great spot for people who like convenience and being close to everything.

Larrakeyah is within walking distance to Cullen Bay, where there is a marina offering restaurants and bars – it’s a big entertainment precinct. Right next to that you have Mindil Beach, where the Sunset Markets bring in a lot of people. The area has a casino, a golf course and the George Brown Darwin Botanic Gardens. The Larrakeyah Army Base is also nearby.

Larrakeyah has a young demographic, with lots of young couples and single people. I think these groups are attracted to having everything in close proximity.

However, the young demographic means there are always problems to do with noise. As an investor, I think you need to look into the construction of the block. There are some buildings that have a good structure, but there are others that may have been built cheaply and do not offer much of a noise buffer. That can be a real pain in the neck for tenants.

The majority of properties in Larrakeyah are units or expensive houses. There are certain blocks with more prestige price tags which offer some amazing views – these tend to be larger units. If you are looking for older properties, you could probably pick up a two-bedroom place for between $400,000 and $500,000.

There is a lot of activity in Larrakeyah at the moment and there are still quite a number of apartment blocks being built. Initially, there was some concern that an oversupply of units might develop in the area, but I do not think that is the case now. We have always had a lack of accommodation in Darwin, and have always secured very good rents in the area.

I think there are opportunities for investors in Larrakeyah because of the location and the style of units that have been built there. If I was buying in the suburb as an investor, I would be looking for a building on the smaller scale, with fewer units.

If you are a buyer and you have money, now is a good time to come into the market because it is a bit softer than it was before. The market is going to gear up again, and I reckon next year will be better than this year. 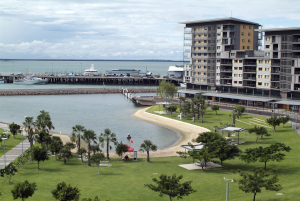