One region just outside a capital city has become one of the hardest places in Australia to sell property.

SQM Research's “Top 10 most discounted properties nationwide” list reveals that it is becoming increasingly difficult to sell properties in the Carabooda region of Western Australia, about 45 kilometres north of PerthPerth, TAS Perth, WA.

Of the 10 most discounted properties nationwide, two were in Carabooda, according to SQM.

The most discounted property in the nation is in Ranelagh in Tasmania. The initial asking price of $2 million is now down to $995,000 (a 50 per cent discount).

The property has been on the market for 782 days. The longest days on market experienced by any property on the list is 1,292 – a property on Tinderry Road in Michelago, a region in New South Wales 54 kilometres south of Canberra.

Of the top 10, four were in Western Australia, two in New South Wales and Tasmania and one each in the Northern Territory and South Australia. 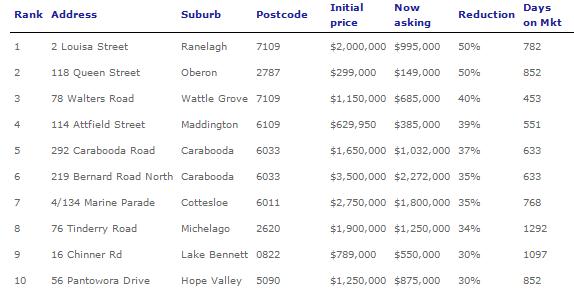