Almost half of all Chinese investment in Australia is now concentrated in commercial real estate, new research has found. Commercial property now represents 46 per cent of Chinese direct investment in Australia compared to 14 per cent in 2013, according to a new report by KPMG Australia, the University of Sydney Business School and China Studies Centre.

This was followed by infrastructure (21 per cent), material investment in the tourism and leisure sectors (12 per cent), mining (11 per cent), energy (7 per cent), and manufacturing and agribusiness (2 per cent).

Furthermore, the volume of Chinese investment in commercial real estate nearly quadrupled in one year to $4.37 billion.

Commercial property company Knight Frank Australia said there had been a huge surge in Chinese outward investment in real estate in recent years, led by the softening of Chinese market conditions and government policy encouraging overseas investment by Chinese firms.

“In turn, this has led to increasing investment levels in gateway markets globally – particularly in Australia,” according to Matt Whitby, head of research and consulting.

The research also revealed that New South Wales attracted 72 per cent of total Chinese investment in Australia, including seven of the eight largest completed deals in 2014.

Western Australia attracted 12 per cent, while Queensland and Victoria each attracted eight per cent.

Looking ahead, Mr Whitby said he expects 2015 will be another record year for Chinese outward investment, both internationally and into Australia.

“After heavy investment in prime office buildings and subsequent yield compression in gateway cities, Chinese investors have begun to look increasingly at opportunities in other key cities and other property sectors, and importantly, in suburban locations in metropolitan Sydney, Brisbane and Melbourne – not just within the CBD and fringe markets,” he said. 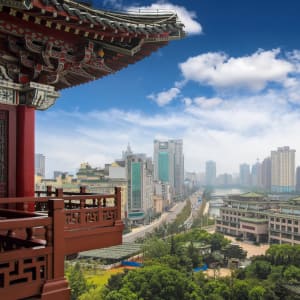 Last Updated: 22 December 2017 Published: 28 May 2015
share the article
When will the Sydney housing market come off the boil?
Australia’s fastest selling suburbs