Learning to bounce back

When Kevin Hui graduated from university in Adelaide, he was confronted with a life-changing decision. He could move back to his native country of Malaysia or make a life for himself here in Australia.

“My plan, until that point, went as far as getting a degree,” Kevin admits. “I was unsure of what to do, because I missed my home country, but had also made a great group of friends in Adelaide.”

He did know that if he stayed in Australia, he wanted to generate a form of income that didn’t rely entirely on his job as a retail pharmacist.

“Soon after starting work, I realised that my financial freedom wouldn’t necessarily be achieved through working harder,” he says. “I knew that I would have to make my money work harder for me.”

After some research and consultation with his family, Kevin identified feasible strategies.

“I realised that to make a decent amount of money, I would have three options – start a business, invest in the stock market, or buy a property.

“Running my own business was likely to be time-consuming, and I felt that I wouldn’t have enough control over my money with the stock market,” says Kevin.
Property investment, he figured, was a tangible asset that would allow him to work full time. However, his first real estate investment would prove to be problematic.

Soon after starting work, I realised that my ¬financial freedom wouldn’t necessarily be achieved through working harder

Too close for comfort

Kevin’s first purchase was a three-bedroom, one-bathroom house in Northfield in Adelaide – a decision driven by what he describes as “a mum-and-dad mentality”.

“I wanted to buy a house that was close by so I could keep an eye on it,” Kevin explains. “I felt emotionally attached to the area and didn’t fully consider the financial aspects of the investment.”

Kevin had become familiar with Northfield while at university, and liked the suburb’s large parks and easy access to public transport.

After finding the property on a real estate website, he presented it to a buyer’s agency for analysis. The agency conducted their own search of the area and encouraged Kevin to purchase the same property.

However, he would later discover that the agency had limited knowledge of the Northfield market. 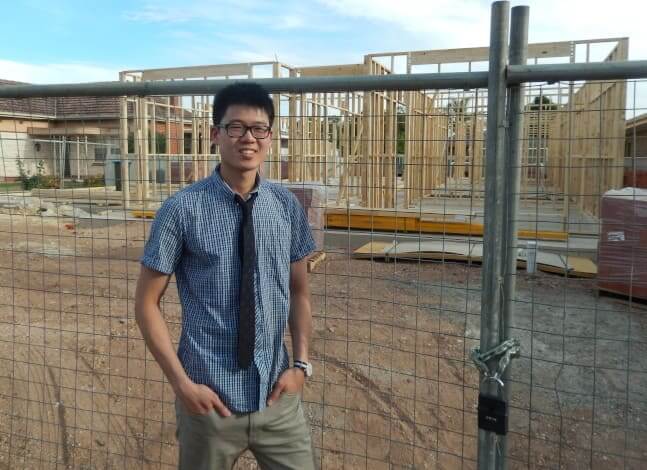 “I went forward with the purchase because I thought I was getting expert advice,” says Kevin. “Besides being based in Sydney, the agency hadn’t fully taken my goals into account.”

Kevin says the group recommended the property on the assumption that he wanted to hold it for 10 years and not five, as he had intended. The property’s capital growth potential was significantly lower over this shorter time frame. However, as he says, “I was riding on the high of owning a property for the first time.”

Kevin’s problems did not end with his exit strategy for the property.

Impressed with his property manager’s performance during his time as a tenant, he chose the same property management company to take care of his investment.

“When I was a tenant, my property manager had always conducted thorough checks of the property, acted on our complaints and made sure that rent payments were on time,” he says.

He soon found out that no two property managers are the same. Although the manager had promised the same first-rate service, he carried out no inspections and became difficult to contact.

“I was living close enough to carry out the managing duties myself, but I enlisted a manager for peace of mind and to save time. What I got was a manager I was constantly chasing.”

Just as the buyer’s agency had little knowledge of Northfield, Kevin later found out that the property manager operated from the other side of Adelaide. The manager’s inexperience in the suburb meant that he recommended a rent that was well under market value.

“I realised only later that at 4.79 per cent, the rental yield could have been significantly better,” says Kevin.

As Kevin’s expenses mounted, he would spend long hours before and after work searching for solutions.

Whilst the self-help books, property research and consultations with his family all helped, he was most impressed with a series of property mentoring case studies he found on one website.

“Reading about the experiences of these investors, I saw a lot of parallels with my own situation,” he explains.

Kevin was initially apprehensive about attending an event in Adelaide that the group was promoting.

“I had been to one-off real estate events that catered for hundreds of people, and I hadn’t been too impressed with them.” However, this mentoring event proved to be different.

“The way that people were interacting with each other made it seem more like a family gathering,” Kevin says. “It was clear that investors at this event had established good relationships with the experts and were free to openly share ideas.”

Kevin introduced himself to the director and began to regularly attend seminars, workshops and one-on-one consultations.

As the group worked with Kevin to identify his best property investment options, he was given ‘assignments’ that required him to create strategies for hypothetical investment scenarios.

“It was like being back at university,” he says. “But the home study aspect was essential, because it allowed me to make mistakes without emptying my wallet.”

With renewed confidence, in February 2012 – a year after his North¬field purchase – Kevin was ready for his next investment.

“A common strategy with all of the successful investors that I had spoken to was their focus on the numbers,” he says. “This led me to look beyond the market I felt comfortable with, and invest in another state.”

The property group identified the western Sydney suburb of Hebersham as a good investment location for Kevin, due to its low entry price and capital growth potential.

After his bad experience with Northfield, Kevin interviewed a number of property managers from the Hebersham area.

“I asked them trick questions in order to ¬find out if they really knew the suburb,” he says. “For example, I said that I wanted to buy a property on a road that I knew had a bad reputation, to see their response.”

Kevin’s strategy paid off – he found a manager who had lived and worked in the area for around 10 years.

“His long service to that company and his impressive local knowledge suggested to me that he was a motivated manager.”

When Kevin presented him with a Hebersham property for his consideration, “The manager produced a detailed report that covered everything from renovation ideas and furnishings, to rental price and lease length strategies.”

Based on the property manager’s recommendation, Kevin purchased a three-bedroom, one-bathroom house for $240,000.

Through renovating, Kevin was able to increase the property’s rent from $220 to $330 per week.

“The Hebersham property has remained occupied since the day that renovation work was completed, and is now my highest-yielding property at 7.15 per cent.”

Kevin’s portfolio is roughly revenue neutral and now contains three properties, after the sale of his Northfield house in January 2014.

After the success of his NSW purchase, Kevin chose the northern Brisbane suburb of Boondall as his next investment location, seeing benefits in its proximity to Brisbane’s CBD and main airport.

Although he was able to extract equity from his Hebersham property for a relatively easy purchase, this time he ran into difficulties with the property’s tenant.

“The tenant had occupied the property for some time and left without telling me after I increased the rent closer to market value.”

In hindsight, he says, he placed too much focus on the property’s capital growth potential without fully considering the worst-case scenarios in terms of cash flow.

Kevin now understands that having a financial buffer in place for every property investment is essential, however smooth the acquisition. “

After paying $395,000 for the property, my exposure had increased significantly. It was a stressful time that needn’t have happened.”

After finding a new tenant for Boondall, Kevin decided to further expand his portfolio by purchasing a unit in Malaysia. He says that investing in different locations is now one of his core strategies, as the risk is spread.

“Strong properties can support underperforming properties with this approach,” he says. “In October 2014, I purchased a three-bedroom unit for $315,000, with the help of my family.”

Kevin says Malaysia’s population boom is spurring a high demand for housing. The unit he bought is in a high-rise development due for completion by the end of 2017.

He says that the strategies that governed his post-North¬field Australian investments were also applied to his Malaysian investment.

“It was more important than ever to keep the emotional elements out this investment, because I have family living close by,” he says. “Much like Boondall, I based my purchase decision on the infrastructure surrounding Ara Damansara.”

A map of the world

Kevin’s success in the property market gives him the ability to be flexible with future plans. He enjoys travelling and hopes to generate enough passive income from property investment to cover his expenses and work less.

“Although I would like to return to Malaysia some day, there are many more areas in Australia that I plan to explore,” he says.

“Moreover, I feel that the Australian market has a lot of longevity and I would de¬finitely consider buying property here in the future.”

Kevin says that he now feels part of two Australian communities – his ‘home’ city of Adelaide, and his property mentoring group.

“Getting involved with the property mentoring group was my smartest move to date,” he says. “I now understand that it’s all about surrounding yourself with people who have the same goals as you do.”

Kevin likes his property experts to practise what they preach. He advises investors to scrutinise professionals prior to engaging them, and carefully consider the locations in which the expert has property exposure.

“Social taboos should be left at the door, because, at the end of the day, you’re entrusting this person with a lot of your money,” he says. “Ask them challenging questions like, ‘Where have you invested?’ ‘What factors encouraged you to invest in this area?’ ‘What kind of returns are you seeing from your investments?’”

Kevin says that although he has become more mindful of cash flow and the need for a financial buffer after Boondall, his primary objective is still capital growth.

“Properties with capital growth potential are crucial if you want to grow your portfolio,” he says.

“Although it is important to have money set aside for issues like repairs and tenant vacancies, the equity to make future investments comes mainly from capital growth.”