Property bubbles: where would Australian news headlines be without them? But just what does this oft-touted term refer to, and are Australian markets really in trouble? What is a property bubble?
A property bubble, housing bubble or real estate bubble occurs when prices in a particular market are growing at a rate that is unsustainable. Property becomes ‘overvalued’ and rents and incomes can’t keep pace with sales prices.

This exaggerated growth is typically the result of enthusiastic buyer sentiment, driven by a fear of missing out, instead of solid market fundamentals. Property bubbles are exacerbated by shortages in supply and a surge in speculators entering the market.

A bubble is not always easily identifiable when it is happening, and a marked increase in property prices and investor activity doesn’t automatically confirm the existence of a bubble.

Put simply, you need to wait for the bubble to ‘pop’ to confirm its existence. The pop occurs when, after a period of above average and unsustainable growth, prices crash and demand disappears.

Predicting the risk of property bubbles actually occurring is also difficult. In Australia, warnings about property bubbles often occur at times when prices are climbing, affordability is called into question and investor activity is high. Those who believe the bubble is occurring point to market speculation and people gambling their investment dollars in the hope that rapid capital growth will continue.

Past performance isn’t an indicator of future growth, so property investors should instead be purchasing based on proven price drivers such as infrastructure projects and increased demand.

The term ‘property bubble’ is subjective, and highly emotive. Not everyone will agree that a market is in the midst of a bubble, or that a bubble has popped.

They may instead choose to describe the price growth as sustainable, driven by solid fundamentals, and interrupted by an unforeseen event that is beyond the market’s control.

Has Australia experienced a housing bubble before?
There’s ongoing speculation that the entire Australian real estate market is overvalued in comparison with the rest of the world – this is referred to as the ‘Australian property bubble’ and is based on the analysis that Australian property prices (as a whole) have been growing at around six per cent per annum since the 1990s, compared to a historical growth rate of half that.

On a micro scale, there are several distinct Australian markets that at various times have been said to be in ‘bubble territory’ – although there is still debate as to whether these conform to the boom/bubble model.

When the resources boom was at its peak in the mid to late 2000s, and the construction and operation of major mining projects in full swing, house prices rose at dramatic rates, fuelled by investors wishing to ‘cash-in’ on rapid capital growth and high-yield investment opportunities.

The growth wasn’t sustainable in a lot of cases – with mining investment slowing down and employment opportunities declining. The surge in demand for property in the mining towns declined as the number of people required to work in the region fell.

When the resources boom began to subside, and mining projects were either completed or disbanded, real estate prices in these mining town markets entered a downwards spiral. Some say that over-reliance on a single economic driver – mining activity – caused the bubble to pop when that industry entered decline.

However, house prices have not quite declined to the levels they were at prior to Australia’s resource boom. There is ongoing speculation that the correction in these markets is yet to be fully realised.

Despite this, there is no doubt that the decline in values has been dramatic, and many investors have been burnt as a result of buying toward the peak of the cycle.

Are Sydney and Melbourne in a property bubble?
Sydney and, to a lesser extent, Melbourne, are often the centrepiece of speculation regarding property bubbles. Year on year (to March 2015), Sydney recorded a 16.8 per cent increase in median house prices, while Melbourne recorded 8.7 per cent growth. Combined, the two cities account for almost half of the Australian population.

Rising house values, attributed to a high level of investor activity in the market and low interest rates, have been of enough of a concern for the Australian Prudential Regulation Authority (APRA) to announce new restrictions on investor lending in an attempt to cool the markets.

Even though these markets aren’t reliant on a single economic source, and instead boast diversified economies and employment – the increased investor activity, rising prices and affordability complains have caused some to argue these cities are in the midst of a property bubble.

Indeed, concerns surrounding investor activity in these markets was the partial catalyst for the APRA’s regulatory intervention during 2015 – notably restrictive new guidelines on the proportion of investor lending institutions can issue.

The Reserve Bank of Australia (RBA) has made several indications that it is concerned about the rate of price growth in Australia’s biggest housing markets, primarily the Sydney market, as have Federal Treasury officials.

Late in 2015, Sydney’s auction clearance rate began to show signs of dropping from the record highs recorded earlier that year – however, median house values have yet to show signs of falling significantly.

Are the Sydney and Melbourne markets in a bubble? Only time will tell.

Are property bubbles all bad news?
Like all property markets, whether a market’s bubble will affect you as an investor will depend on when you bought during the market cycle. If you bought during the peak, and failed to sell before the ‘crash’, then you are likely in for some short- to medium-term pain. How well you and your investment plans cope with this is dependent upon your portfolio’s structure and your personal financial position.

If you are able to ‘weather the storm’ the chances are that, in the long-term, you will see the value of your property rebound, although perhaps not quite to its previous heights.

If you bought prior to the boom, and before the bubble burst, your financial position might not be severely affected – again, depending on your portfolio’s structure.

If you get panicked by speculation of a bubble, you might sell too soon, and miss out on further capital gains.

The ideal scenario would be to buy before the boom, and sell at its peak, before the property bubble bursts. But that involves knowing when a market is in a bubble – an ability every investor would love to possess.

How can you avoid buying into a property bubble?
Strategies to avoid being overwhelmed by the results of a property bubble burst can include avoiding properties that tend to be hit the hardest by market volatility – high-end real estate such as luxury apartments or expensive beachside property, as well as apartment buildings in high-density blocks.

If you have multiple properties, make sure that you spread your risk across multiple locations.

Different cities operate to different cycles, and it is unlikely that all will be hit by the same crash, or at least, by the same rate of decline. Even different suburbs are likely to be affected in different ways – by spreading your investments across multiple locations, you can mitigate risk.

Read More
What is a property bubble? 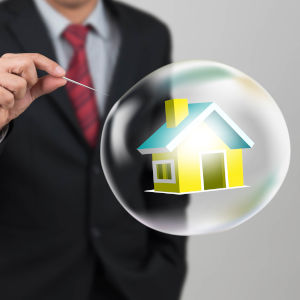