As Sydney and Melbourne continue to soften, Brisbane has been tagged as the next best hotspot for property investment. How good a value does the Queensland capital actually represent today?

While most capital cities did not rank highly in terms of housing affordability, Brisbane boasts a rating of 5.3 out of 10, following Adelaide and Perth with 5.6.

However, despite the opportunities in the Queensland capital, some experts deem it ‘not too interesting’ in terms of wealth-creation potential.

According to the Housing Industry Association’s Tim Reardon, the past seven years saw no significant movement in the Brisbane property market as it cycles through boom/bust cycles, particularly in its apartment market.

Even the market for detached housing remains equally uninteresting, particularly in South-East Queensland where the market is labelled ‘strong but not remarkable’.

“They’ll go again, their apartments are clearing the market, there’ll be another suite of apartments built in Brisbane in the near-future.”

“Their pipeline of work has relatively short, and at the end of last year, it tightened up extremely quickly [with a] 20 per cent drop off in approvals, and a reasonable share of those were builders volunteering spec homes into the market, so it’s one we’re a little pessimistic about.”

Still, Brisbane, as well as most part of the state of Queensland, offers stronger capital growth prospects compared to other capital cities across Australia, Mr Reardon highlighted.

“With still the strong population growth, they should be achieving better outcomes than what they are – that there is our forecast for Queensland for the next couple of years.”

While the cash rate is expected to remain stable, Market Economics’ Stephen Koukoulas believes that there could be a significant decline in the near future.

“The economy has slowed, with the per capita GDP recession in the second half of last year probably continuing into 2019. Inflation is low and with the household sector under pressure from falling house prices, some policy stimulus is needed.”

REA Group’s Nerida Conisbee also believes that a rate cut is possible within the year based on the five indicators of economic sentiment tracker namely: housing affordability, employment, wage growth, cost of living and household debt.

“If economic data continues to deteriorate, then we will likely see movement in the second half of the year,” she said.

If the rate cuts happen in 2019, prices could decline significantly across capital cities.

Houses and units in Brisbane may see declines ranging from $48,947 to $7,345, along with properties in Melbourne, Perth and Adelaide.

Of all the capital cities, only Hobart is expected to see prices rise in the event that the rate cuts happen.

Finder’s Graham Cooke said: “Right now, there’s no need to jump on the first property you like. Use this time to save for your upfront costs. Look for value before you plunk down your deposit. Buying at the right time could potentially save you tens of thousands.”

While growth in property values remain lackluster, the residential land market of Brisbane has seen ‘minor’ success since the latest official valuation, with select areas continuing to witness signs of strength even after the Queensland Treasury said that dwelling investment has entered a recovery phase following a 4.8 percent decline in 2017-18.

In the Greater Brisbane region, the Redland City Council emerged as one of the most improved areas in terms of land value, with a notable increase in Alexandra Hills, Logan Central, Woodridge, KingstonKingston, QLD Kingston, ACT Kingston, TAS and Jimboomba.

The release of 2019’s budget highlighted several projects focused on transport infrastructure, with $100 billion to be dedicated to the improvement of accessibility properties, job sites and delivery routes over the next decade.

Among the major projects lined up are the Melbourne to Brisbane Inland Rail, the Western Sydney International Airport and the Melbourne Airport Rail Link.

There will also be billions of funds dedicated to the Urban Congestion Fund and the Roads of Strategic Importance, as well as other projects in the states of NSW, Victoria, South Australia and Western Australia.

As the government delivers the infrastructure projects, they also commit to a return to surplus. While the 2019/19 financial year will end in a deficit, a surplus is projected for the 2019-20 federal budget.

Still, despite the long list of projects lined up for the coming years, experts remind investors that these infrastructure projects are still merely plans and should not be the sole basis for investing in an area.

According to Property Investment Professionals of Australia’s Peter Koulizos: “You need to be careful because these are just plans, and previous NSW governments have been unfortunately renowned for announcing plans but not going about it.”

“Wait until the first sod of soil is turned, and then you have more confidence about following up your analysis on infrastructure spending.”

While Brisbane is doing arguably better than Sydney and Melbourne in terms of wealth-creation opportunities, experts remind investors that the ultimate outcome of an investment will vary from location to location.

“Overall, Brisbane is a split market… It usually comes down to supply and demand. Clearly, the property should be in a good location and it should have the elements of a good property investment,” according to Brisbane-based buyer’s agent Melinda Jennison.

Ms Jennison encouraged investors to do their research and due diligence before committing to any investment property because, at the end of the day, it will be a long-term commitment.

As such, she also encouraged them to consider value-add opportunities through potential renovation or expansion as well as exit strategies before adding a property to their portfolio.

“Property investment, certainly, is a long-term commitment for most people, so understanding long-term trends in property, that’s what’s most important.”

“We’ll certainly recommend the types of properties that give them various exit strategies. We believe in understanding what the purpose of the property acquisition is at the outset, so we discuss exit strategies before we even start looking for a property for a client. Multiple exit strategies gives them more options.”

“We always discuss strategy with our clients because it’s important to know upfront what the purpose of the investment is and to understand the timeframes that the investor has in mind. That’s all part of their goal-setting and strategy development,” Ms Jennison highlighted.

Moreton Bay, could be offering a more significant value proposition considering the new infrastructure set to be built in and around the area, as well as the possibility of further rezoning in the near future.

Since it continuously secures strong housing demand through population growth and interstate migration, Moreton Bay has been declared as a priority development area by the state government, ultimately driving it towards becoming the highest-growing shires across Australia.

According to Ms Jennison: “In property investment, it comes down to supply and demand, but on top of that, it also comes down to having locations where people can secure good jobs, high-paying jobs.”

“We feel that Moreton Bay will gentrify quite quickly with young university students moving in, so we’ll see the types of accommodation gradually change over time to suit their preferences. There’s lots of opportunities within the area and the region as a whole because of this gentrification.”

Among the major projects in the region that are expected to contribute to property growth are the establishment of the new campus of the University of Sunshine Coast and the development of The Mill at Moreton Bay.”

Apart from Moreton Bay, the regional city of Mackay, located 1,000 kilometres from Brisbane, has also been deemed as a strong economic performer in Northern Australia.

Knight Frank’s Craig Stack said: “Opportunities are ripe for investors and developers across both the residential and commercial sectors, fuelled by rapidly forming demand.”

“With 12,000 more people employed in June 2018 than June 2015 the unemployment rate for the region fell to 2.7 per cent, and this has re-established an economic confidence across its business and residential community.

“The end game for development sites can be understood once again after a long period of doubt about whether new product would be occupied.” 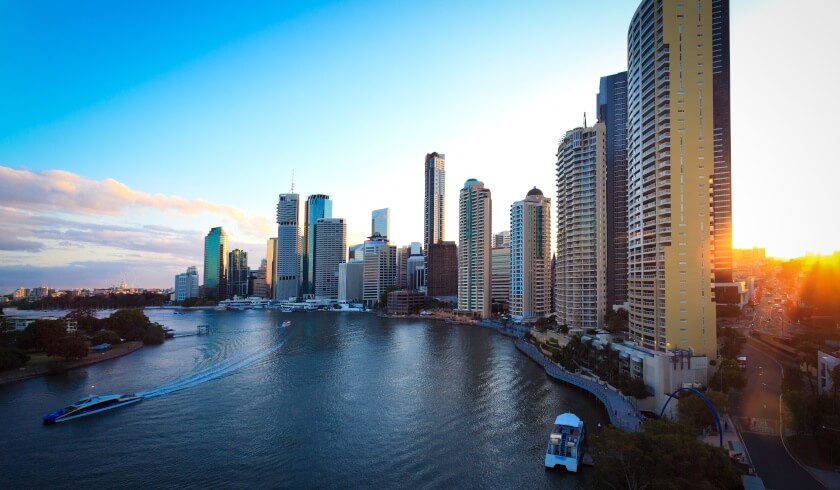