Property buyers around Australia have been consistently reading negative news and media headlines in relation to property values around the country. Over the last month, the news has suddenly become a lot more optimistic. And Brisbane appears to be the city set to benefit most! Let’s explore what has been happening on the ground, and unpack what the monthly data tells us. Westpac Bank has updated its property price forecasts this month.  Their economists are now expecting a serious boom in the coming years, with Brisbane tipped to perform the best out of all Capital City Markets around Australia.  The bank’s economist expects Brisbane property to surge 20 per cent between 2022 and 2023. 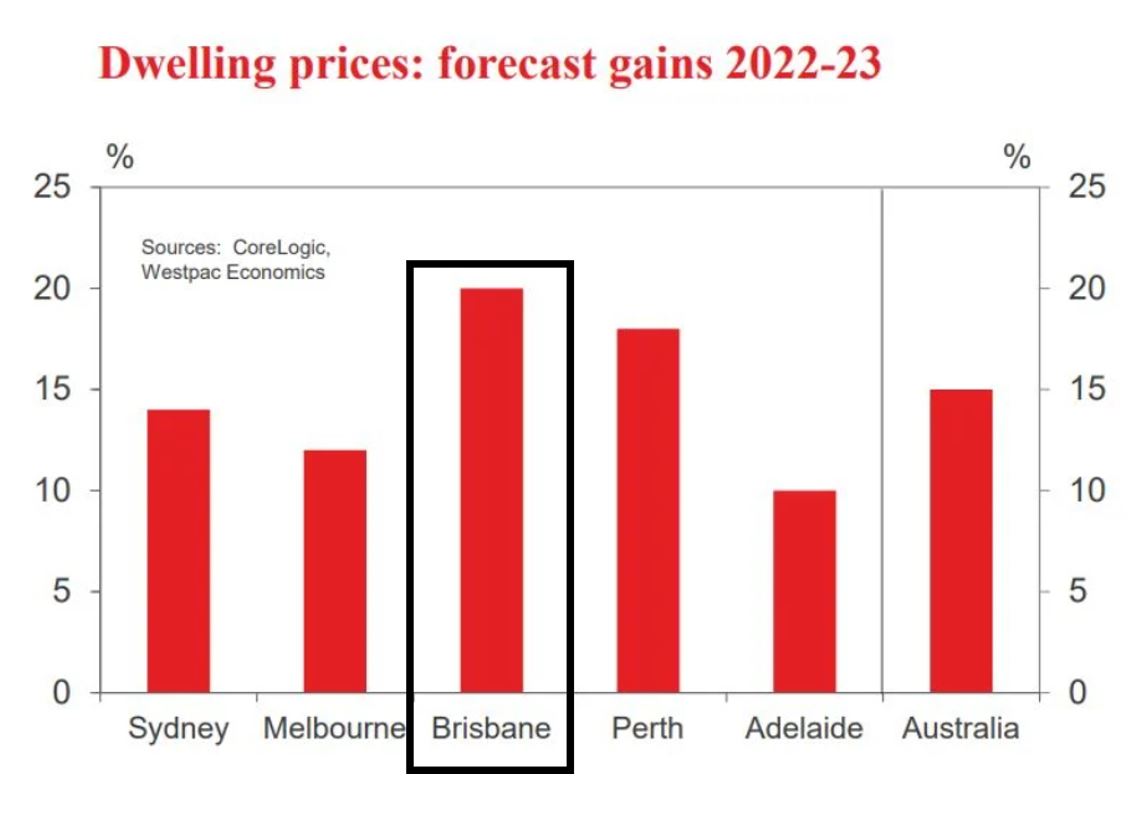 The Westpac report indicates that the recovery is likely to be supported by sustained low interest rates, ongoing support from regulators, substantially improved affordability, sustained fiscal support from both federal and state governments; and a strengthening economic recovery.

With some other major lenders in Australia remaining less bullish, such as Commonwealth Bank and ANZ, what forecasts are we supposed to believe?

It is our view, that not all markets around Australia will recover in the same way or at the same speed. Local drivers of supply and demand will determine local performance.

Last month, we reported that the Brisbane property market performs in a different way to Sydney and Melbourne. Local drivers of supply and demand will always determine property price movements. Right now in Brisbane, our properties are more affordable, our income to debt ratio is a lot lower and the amount of our take home income that we spend on our mortgages here in Brisbane is also a lot lower.

This gives us an enormous advantage over our Southern East Coast Capitals, such as Sydney and Melbourne.  We are already seeing a huge spike in buyer interest from Interstate, driven by affordability and the desire for a better lifestyle.  The pandemic has definitely caused a shift for a lot of people in the way they want to live, and it seems that South-East Queensland may be set to benefit.

According to the latest Hedonic Home Value Index data by Corelogic, dwelling values in Brisbane saw an overall median monthly price rise of a 0.5 per cent over the month of September 2020. This now makes up for the total decline in dwelling values across Greater Brisbane with the quarterly change at 0 per cent. As we mentioned over previous months, the dire predictions for large falls in value simply did not occur in Brisbane and many property buyers who have been waiting for bargains to appear, have been disappointed. In fact, prices in some areas throughout Brisbane have continued to climb. 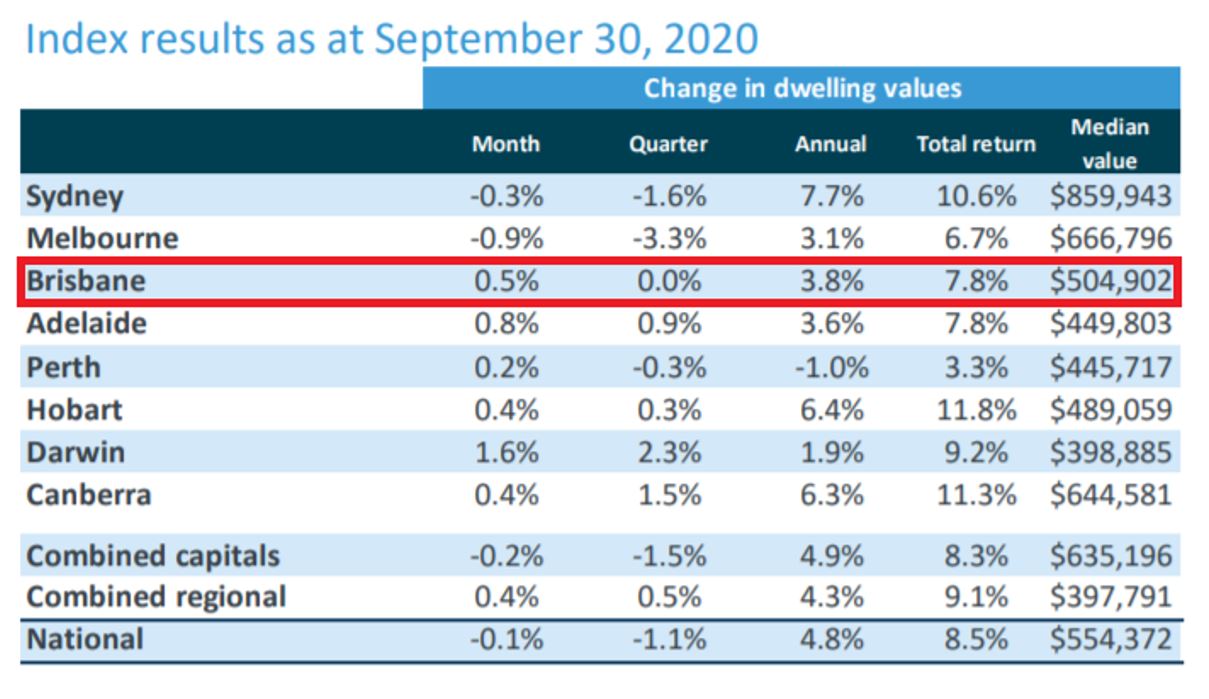 The data is demonstrating a large divergence between regions where the virus curve has steepened, and where the virus is well contained.  Melbourne is the market that has been impacted most with dwelling values falling a further -0.9 per cent across the month of September followed by Sydney will price falls of -0.3 per cent.  These markets make up approximately 40 per cent of Australia's housing stock by number and 55 per cent by value so the national reading still shows a fifth straight month of decline with overall values declining -0.1 per cent during September.  This is hardly in line with broader, more pessimistic predictions of much larger falls, but is does highlight that some areas are definitely more impacted than others during this time.

In the Brisbane Housing Market, we saw median values for the greater Brisbane region increase 0.4 per cent across the month of September 2020. The current median value for a Brisbane house is now $559,646.

The Unit Market in Brisbane saw a slightly higher median value increase of 0.7 per cent for the month of September 2020. The current median unit price in Brisbane is now $388,505.

You can see from the table above, that vacancy risk is still high in the inner city region where there is a large number of higher density units. Rents in the unit market in Brisbane saw price falls -1.6 per cent from March 31 to September 30, a consequence of supply and demand side factors.

We have seen a huge increase in the supply of investment apartments over the past few years in Brisbane, with a significant number of new apartments being built.  Additionally, many short term rentals (such as air bnb rentals) have recently transitioned to longer term rentals due to restrictions on travel for a number of months due to Covid-19.  Whilst the availability of these rentals has surged (ie: supply) we have also seen a huge decline in the demand for these properties due to a number of factors.

International and state border closures have weakened apartment demand from short term travelers, as well as international students in Brisbane. Additionally, industry sectors such as hospitality, the arts and recreational services have been hit the hardest by job losses and reduced working hours.  These types of workers are more likely to rent inner city apartments, which has also negatively impacted on the demand for these properties in Brisbane.

See below the change in rents for Brisbane Units and Houses from March 31 to September 30 2020.

What are we seeing on the ground across Brisbane?

We continue to see a ramp up in the number of buyers in Brisbane.  With record low interest rates and the recently announced plan to relax lending laws, we expect credit availability will become even more free flowing in the months ahead.

We believe that the middle ring suburbs in Brisbane are showing the highest level of demand over recent weeks. We are seeing a combination of first home buyers, investors and families compete for a very small number of properties that become available.

The successful virus containment in Brisbane has meant that the real estate market has continued to operate as usual.

We are seeing high volumes of buyers at open homes every Saturday and even mid-week inspections are busy in many suburb around Brisbane. Multiple offers are still very common – even with properties not actually listed online. There is sufficient off-market demand from buyers (many through Buyer's Agents) to cause some level of competition for off-market transactions also.

“The news remains upbeat. Agents have said they’re registering solid numbers at open homes and multiple offers on properties isn’t an unusual event. The limited listings that do make it to the web portals aren’t sticking around for long. If this level of demand keeps up (and indications are that it will), then we may well see spring and summer seasons that are more impressive than may have been expected just a few short months back.”

Of course, there will always be properties that are listed for sale, but that don't sell immediately.  We are seeing some of these properties throughout Brisbane also. These properties are usually those with some type of compromise, or with vendors who have unrealistic price expectations. It is very easy for properties like this to become stale listings, at which time many buyers believe there must be something wrong with them if they have not sold quickly.

Investors are also starting to regain confidence. Our buyer list is starting to include more investors than home buyers once again.  With a striking return in the housing market sentiment and consumer confidence, investors are starting to position themselves for the potential wave of capital growth that has now been predicted.

The outlook for the Brisbane housing market is subject to a combination of headwinds and tailwinds over the next few months.

The headwinds will appear as the fiscal support winds back. There may be an increase in the number of property owners that need to sell as mortgage repayment holidays end and the benefits of JobKeeper and JobSeeker fade out. We have not seen any evidence to date of distressed selling in Brisbane, and based on the current level of buyer demand it is likely that any increase in new listings will be rapidly absorbed by the market.

Of course we will also see low rates of migration to South-East Queensland until the borders open for everyone. Additionally the labour market outlook looks weak and wages growth is likely to be minimal. These factors may have some impact on demand in the months ahead.

In terms of tailwinds, we currently have low mortgage rates (with the potential for rates to fall further), low listing volumes, government incentives and improving consumer sentiment. According to Corelogic’s Head of Research, Tim Lawless, these factors "seem to be outweighing the negative economic shock brought about by the pandemic."

With the federal budget announcements to stimulate the economy further, anything aimed at supporting jobs and improving consumption will be of benefit. We look forward to seeing what policies are introduced during the nationwide recovery.

Queensland also goes to the polls in October, and we expect the campaigning from major parties will focus on promises for jobs, and an economic recovery. Brisbane, and in fact Queensland, will have an interesting few weeks ahead as we discover more about what is proposed and more importantly, how it is going to be funded.

In July 2021, a CoreLogic study showed a record high gap between median house and unit prices in the Australian property... Last Updated: 09 October 2020 Published: 08 October 2020
share the article
Hot Property: The biggest stories this week 5
How will the budget shape the property market? 10 things to consider before buying a commercial property