This article will highlight what has happened in the Brisbane property market throughout December 2021.

Brisbane continues to be the fastest-growing capital city throughout all of Australia, according to CoreLogic data released on 4 January 2022. Our city continues to lead price growth throughout the nation, reaching a new cyclical high in the last quarter of 2021.

The strong price growth is partly driven by continued low supply in Brisbane. The number of properties available for sale in the period up to 5 December 2021 was -27.2 per cent lower than the equivalent period last year, according to CoreLogic data. This contrasts with other capitals such as Sydney and Melbourne, where listing numbers are equivalent to or greater than the same time last year. 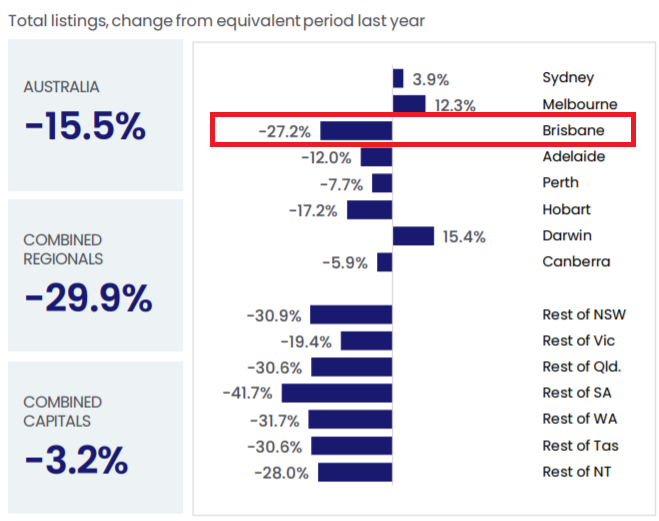 Looking at auction clearance rates from Domain throughout December, we saw Brisbane perform between 72 per cent and 75 per cent across the three weeks up until Christmas. This is much higher than previous years but a little lower than the recent trends we observed throughout October and November. This could be due to fewer buyers in the market throughout December or sellers’ expectations starting to move ahead of the market. Time will tell as the early auction clearance rates for 2022 become apparent.

In terms of longer-term demand, one contributor (although not the only contributor, of course) is population growth, and in the 2021 financial year, interstate migration to south-east Queensland surged to the highest level since the early 2000s, with overall population growth reaching +45,900, which came at the expense of other states whose population numbers declined – especially Victoria.

With job opportunities still rising, according to the Department of Employment, there is also continued positivity in sight. The total number of job advertisements in Queensland, seasonally adjusted, is up 57 per cent from pre-COVID levels. This is certainly reassuring for our local economy as we move into the early months of 2022.

Unlike other capital cities around Australia, despite recent price growth that has been experienced, Brisbane remains one of the more affordable options for property buyers. We are also amongst the highest yielding capital cities as well.

With a pending federal election this year, we expect housing affordability to become a hot topic for the major political parties in the months ahead. We also have the threat of Omicron and COVID-19, with case numbers escalating rapidly throughout Brisbane and south-east Queensland now that borders have opened.

In this month’s update, we outline the performance of the Brisbane property market across all sectors and provide our insights in terms of the months ahead.

The latest Hedonic Home Value Index data by CoreLogic, released on 4 January 2022 for the month of December 2021, has confirmed that the median dwelling value in Brisbane increased by a further +2.9 per cent over the month. This price growth is the same rate of price growth when compared to what we observed in Brisbane last month. This confirms that Brisbane is still at its peak rate of growth in the current cycle, with no slow down yet to be observed in dwelling price growth. The current median value for dwellings across Greater Brisbane is $683,552, which is $22.353 higher than just one month ago.

The quarterly growth in dwelling values across Greater Brisbane is now up 8.5 per cent. Annual growth for the last 12 months for Brisbane dwellings is now +27.4 per cent.

Brisbane’s higher value properties remain at the forefront for price growth, as you can see in the CoreLogic Data below. In the three months to November 2021, the top 25 per cent of values experienced 8.1 per cent growth (up from 7.3 per cent at the end of October) compared to 5.9 per cent growth in the lowest 25 per cent of property values across the city (up from 5 per cent last month). The middle 50 per cent of values in Brisbane saw an increase in the three months to November of 7.1 per cent, compared to 6.1 per cent growth in the three months to October. All segments of the Brisbane market are in a strong growth phase right now, but the top end of the market is still growing at the fastest pace when we look at three-month trends segregated by price point. Looking at the data even closer, we can see that when we compare the last two updates for this data, the trend is showing that the top 25 per cent of values demonstrated three-month growth that was up 0.8 per cent (i.e. the three-month trend between the end of October and the end of November 2021 showed a further increase of 0.8 per cent in this price segment), the middle 50 per cent of values was up 1 per cent, and the bottom end of the market was up 0.9 per cent. This is a trend worth watching closely, especially if the Brisbane market moves into a price point where affordability constraints start to have an impact. 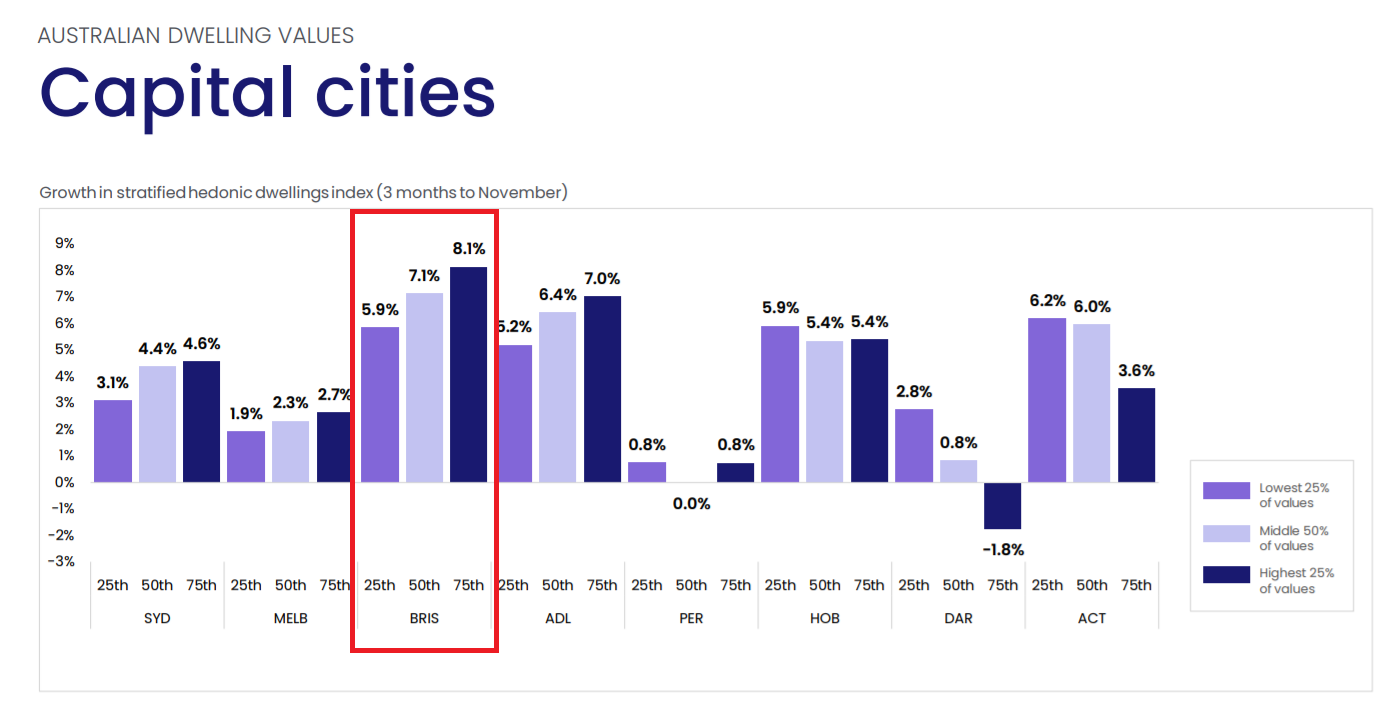 The Brisbane housing market continues to lead the nation in terms of monthly price growth. Median values for the greater Brisbane region increased a further 3.1 per cent in the month of December 2021, down just slightly from the November 2021 high of 3.2 per cent price growth. This is yet another new record median value for Brisbane. The 12-month change in Brisbane house prices has been 30.4 per cent, which is the strongest 12-month house price growth across all capital cities throughout Australia.

The unit market in Brisbane picked up again throughout December 2021. Unit median values in Brisbane were up 1.6 per cent this month, compared to 1.1 per cent last month. The 12-month growth for units across Brisbane is now +12.7 per cent. The current median unit price in Brisbane is $451,256, which is $7,275 more than one month ago.

The graph below charts the per cent change in property values for houses and units since January 2020 in Greater Brisbane. 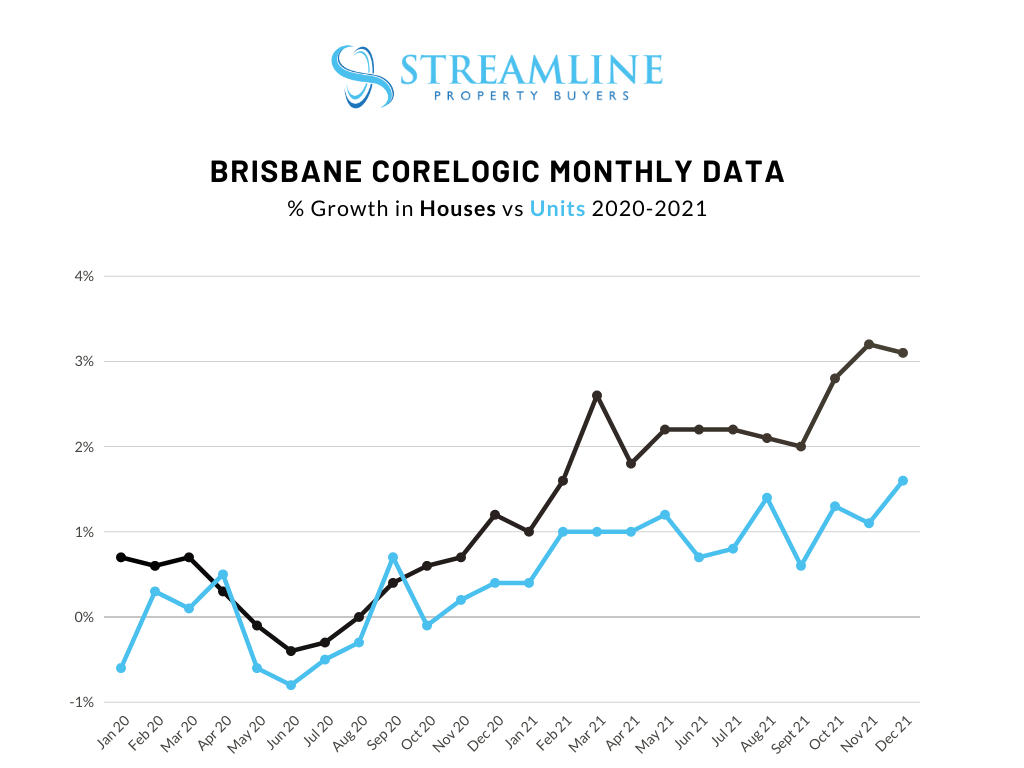 The housing sector (black line) continues to outperform the unit sector in Brisbane on a month-to-month basis. This has been a trend observed since October 2020. We can clearly observe a divergence in the rate of growth on a month-by-month basis in the different property types. 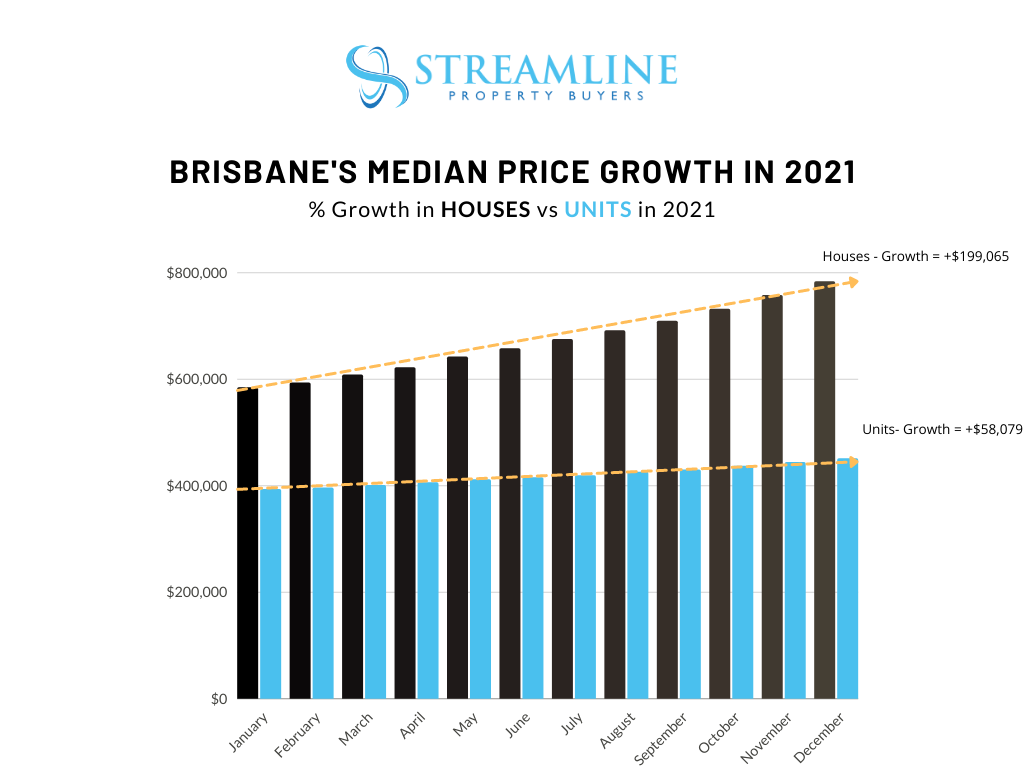 Vacancy rates at a city-wide level in Brisbane tightened slightly between October and November and are currently at 1.3 per cent (down from 1.4 per cent last month). The table below highlights where vacancy rates across Brisbane sit at the end of November 2021.

Vacancy changes only very slightly this month across every sub-region throughout Greater Brisbane, as can be seen in the table above. These tight vacancy rates are continuing to put upward pressure on rents throughout the city.

Housing rents have demonstrated annual growth in Brisbane of 11.8 per cent, according to CoreLogic data, which is up only slightly, a further +0.1 per cent, compared to one month ago.

Rental incomes in the unit market throughout Brisbane have seen an annual increase of 6.9 per cent, up only +0.1 per cent compared to last month also.

Gross rental yields for dwellings across all of Greater Brisbane, according to CoreLogic, have slipped slightly lower again this month due to property values rising faster than rents. As of the end of December, the gross yield in Brisbane is 3.7 per cent, down a further -0.1 per cent compared to last month.

What did we see on the ground across Brisbane during December 2021?

There was definitely a slow down in buyer activity in the weeks leading up to Christmas in December 2021. This is a seasonal trend that is observed as people tend to focus on the festive season and family events.

Despite the slightly reduced demand, there were still enough buyers who were active in the market to cause multiple offers on most properties. It was the depth of buyers that was the change we observed throughout the month. So instead of competing with 15-20 buyers when submitting offers on properties, it was more commonly only four to six other buyers. It was a nice reprieve after such a competitive year.

Most listing activity on the main real estate online portals stopped mid-month, with the last busy Saturday for inspections and auctions being 18 December in 2021. Whilst some agents were happy to continue transacting off-market right up until Christmas Eve, the majority of agents were winding up at this time, looking forward to a well-earned break over the Christmas and new year period.

Now that state and international borders are open, we do expect to see a renewed spike in demand for Brisbane property. This may place additional pressure on prices in the absence of a corresponding increase in new properties being listed for sale – especially in the short term.

Of course, we also have the rising threat of COVID-19, with the rapid increase in infection numbers occurring daily as it spreads throughout south-east Queensland. With strong rates of vaccination, we are hopeful that this will have little impact on the health of those exposed, but also on our economy that has continued to thrive without extensive lockdowns slowing things down. We expect there to be short-term inconveniences associated with increase in case numbers, but at this stage, we do not expect that this will impact supply or demand in the local property market here in Brisbane.

The first few months of 2022 are expected to see continued strong price growth, especially in the housing market, here in Brisbane. There will come a time in the near future when the housing growth rates peak, and buyers may turn to the more affordable option of units to stay within their desired suburbs. From an affordability perspective, this also makes sense, with unit values showing much slower rates of growth in Brisbane compared to houses in recent times.

We expect 2022 to be another exciting year for Brisbane property, and price growth should continue based on the supply and demand metrics currently at play. For how long this lasts, not one really knows. But when we see either a fall in demand or an increase in supply on the ground, this will be the first sign of a market shift, and we will report on this when it happens. Here’s to 2022 and everything that it will bring!