Despite increasing fears of an impending bursting of property bubbles in Australia’s two largest capital cities, the Melbourne market should be safe because of its land market, says one commentator. Housing bubble speculators aren’t looking at the whole picture in Melbourne, where land is far removed from such conditions, according to Satterley Property Group.

The group’s general manager, Jack Hoffmann, said the bubble commentary has been focused exclusively on the established inner-city market and hasn’t taken the land market into account.

“We’re hearing all this talk of ‘is there or isn’t there a bubble?’ and that the established housing market is in serious trouble,” Mr Hoffman said. “But this simply isn’t the case for the land market.

“The median land price grew by 4 per cent last year, which hardly indicates that we have entered a bubble.”

The land market, as opposed to the established market, has seen consistent and sufficient supply, preventing it from entering similar bubble-like conditions Mr Hoffman said.

“The state government has done a good job of approving enough land for development, which is now readily developed to satisfy demand.”

As Melbourne’s population grew by 85,000 to 95,000 people over the past few years, land supply levels increased to accommodate it, Mr Hoffman said.

“As a result, you currently have about 170 active land developments in Victoria, compared to around 90 in 2010.”

Mr Hoffman said without this increase in supply of land, prices could have spiralled out of control.

In June, two economists told the House of Representatives Standing Committee on Economics that we are suffering the ‘largest housing bubble on record’ and that the nation's changing attitude to property has made a housing ‘bloodbath’ all but certain.

Lindsay David and Philip Soos from LF Economics said property is now commonly seen as a speculative asset to flip, rather than a home to raise a family.

Those comments focused on the established housing market and do not seem to take in to account the land market. 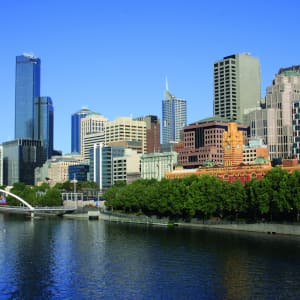