Suburbs on the west coast are among the most affordable in Australia at the moment, and some are recording over nine per cent yields.

The first area on Mr Perks’ list is Coolbellup, which has both solid rental yields and capital growth prospects.

“What I like about Coolbellup is it’s got a really nice age population, the 24 to 49 age bracket is nearly 60 per cent,” Mr Perks said.

“They’re working class, young families, and then retiring couples with that opportunity to downsize, so that’s one that jumps off the page at me.

“If you go to the next suburb north, which is Willagee, that is a very similar suburb 15 years ago, and I think that suburb will follow the suit of Willagee.”

Next is Bunbury, and despite having prices around $450,000, Mr Perks said it was not uncommon for properties to sell at the $355,000 mark, where even these properties can find solid yields, he claimed.

“The construction industry at the moment in WA is very, very soft, so property values reflect that, in my opinion, but there is some good industry out the back of Bunbury,” he said.

“The market can’t respond [to demand], the banks haven’t been lending money, so the market has just been sitting idle with no movement for the last 12-18 months, so Bunbury is one I can really see go.”

Port Hedland followed, and investors have the potential to find yields here of over 9 per cent, Mr Perks claimed.

He estimated that 80 per cent of properties in the area are rented out as opposed to being owned, proving how popular the rental market is in the area.

“It’s quite a transient population, but it’s mainly based on the mining and mining services and the public sector demand for rentals, so you get really good corporate tenants.

Investors looking for both high yield and capital growth may want to back down, however, as Mr Perks predicted that there will not be capital growth in the area for five years.

The reason behind this was high prices of iron ore per tonne.

“They’re in production mode; they’re going back into construction phases. Now we’ve got some certainty with government and government policy, now the miners can take their foot off the brakes and get into some growth,” he said.

The notion of going into an area reliant on mining may be a turn-off for some investors, but Mr Perks said the local economy is sustainable at around $40 a tonne for iron ore.

Fourth and fifth on Mr Perks list were the side-by-side blue collar suburbs of Maddington and Armadale.

While these areas offer yields of 5 per cent, investors run the risk of the tenant temperament, Mr Perks claimed, citing “some rough elements”.

“Good working-class range, ability for investment opportunities in that downsizing aged market, if you’ve got a retiree over 50s who are retiring and they’re getting into a three by two or something smaller, those areas tick that box.

“But they do have some riff raff in there, so it goes with territory.”

A similar area to Bunbury, Eaton provides investors with a lower entry point of approximately $100,000 less than its neighbor.

“Good yield, it has all the benefits of, it’s got a really good shopping complex infrastructure there, and it’s closer to Muja power station [and] expansion projects,” he said.

“It’s, I think, 8 kilometres from the CBD of Bunbury, so for something $100,000 less; it’s really young; the zero to 18 age bracket, young couples and couples with children form a really big part of that community.”

“That’s got a good yield. I think it will have its upside again. It’ll be probably a year or two after Bunbury starts to move upwards, but that one, I think it’s a really nice area. And good quality houses on the majority, good tenants, pretty good schools, very good shopping centre.”

The current conditions in Western Australia in general have paved the way for investors to find some good bargains, as there currently is no real competition to be had in the market.

“WA’s in a particularly soft economy. We might be getting the ... in GST revenues from mining at the moment, right? But the construction industry here is on its knees, and with the royal commission, the banks not lending money, property hasn’t been selling, and the gap between someone being able to sell their property, they've had to drop their prices dramatically to get out, because there’s not a normal market,” Mr Perks said.

“I think we had of about 60-65,000 property transactions a year. In the last 12 months, we’ve only had about 30-33[,000]. So, if you’re purchasing, looking for investments and you’re not from WA, you’re not competing with buyers yet in the market because the construction industry hasn’t taken off.”

As soon as the construction industry improves, Mr Perks can see that competition return.

“When construction takes off, then money starts to filter straight into the economy immediately, like a bricklayer will go past the bottle shop, buy a six pack of beer on his way home, he’ll go to the local deli, they buy pie and ships, smoko, that sort of thing,” he said.

“So that money gets relieved off when you think of the economy quickly, and then they buy a house and you’ve got a competing market. At the moment, that market doesn’t exist.” 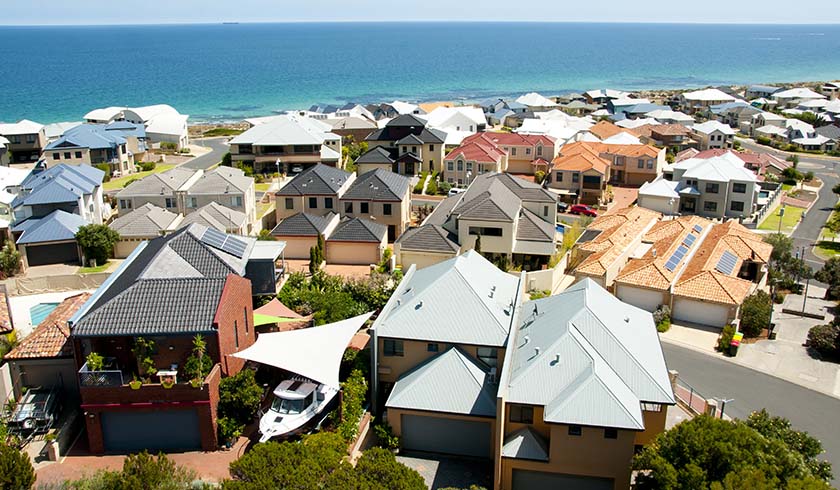